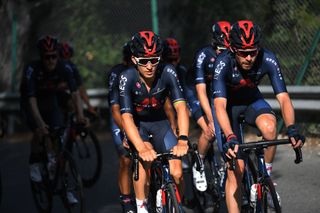 When Egan Bernal sprinted to third place on stage 1 of Critérium du Dauphiné, one rider was watching him take off. When the young Colombian tried to match Jumbo-Visma on the slopes of Col de Porte, one rider set the pace for over two kilometres of its steepest part. And when Bernal pulled out of the race, the same rider spent his day in the breakaway, hoping to win a mountain stage despite not being a pure climber.

Michał Kwiatkowski came to the Tour de France on form to begin his fourth Grande Boucle with the British team. Together with Luke Rowe and Jonathan Castroviejo, he forms a unit of multi-skilled operators whose only job is to make sure their team leader is kept out of trouble and in the best possible position.

This year, with both Chris Froome and Geraint Thomas absent from the Ineos Grenadiers line-up, the trio have to coordinate with newcomers to the team: Andrey Amador, Richard Carapaz and Pavel Sivakov. The Ecuadorian and the Russian made their debut in the race and both crashed on he stage 1 slippery roads.

"It’s hard to judge if this is going to be a problem. I don’t believe so," Kwiatkowski said when asked about cooperation within the chosen eight.

"This is a new situation for all but this year is full of those and we are approaching it as a new challenge to tackle. You need to be very open and honest in terms of what you say and what you expect from the team. You have to think about it. It’s hard to expect that the team will be fully aligned immediately.

"At the end of the day, the most important thing is that each of us has come here as a team to target the top spot of the podium in Paris. Each of these riders is ready to sacrifice himself for the overall victory. I guess this is the best way. I am among the guys who will be taking care of all this working out in the next three weeks. I think it will do."

Ineos Grenadiers are backing defending champion Egan Bernal as their leader for the three-week race. However, the Colombian is still feeling pain in his back. Having withdrawn from Critérium du Dauphiné earlier this August, he focused on recovery but in the pre-race press conference admitted that he hopes to "still work hard on the back, trying to recover, especially for the last week".

Kwiatkowski didn't mention Bernal’s state of preparation but pointed out that having one leader does not rule out engaging in tactical battles and using other riders, who already have the pedigree to shine in three-week races.

2019 Giro d'Italia winner Richard Carapaz was a late addition to the squad, while Kwiatkowski also spoke of Pavel Sivakov, although the Tour debutant has since lost 40 minutes already after crashing on the opening day.

"Let’s not forget that Richard Carapaz won the Giro, let’s not forget that Pavel Sivakov is in an incredible form this year, which he already showed at the Critérium du Dauphiné. Riding for one leader does not mean that we will not play our cards with other riders. It also means there isn’t so much pressure on Egan," Kwiatkowski said.

"This is the Tour, Egan can play it well tactically in the finals with Pavel and Richard. From where I sit, it is not so different to the past years; it’s easier to play when you have more than one card. Egan will therefore have strong support," he said.

Kwiatkowski sees stages 17, 18 and the final time trial to La Planche des Belles Filles as the deciding days of the race but knows all too well that a lot of work needs to be put into staying upright throughout the first days.

"We came here to win again and we will be adjusting to the circumstances, to what others are doing and to who feels strong enough, who doesn’t lose time in the first week and is able to gain in the second and third weeks. You cannot win the Tour in the first week but you can certainly lose it there."

Looking ahead, Kwiatkowski predicted the general classification will already have been significantly shaped by the first rest day on Monday, in what is a hilly first week.

He also does not throw in an ‘if', nor does he ponder on the scenarios of the race coming to an end early due to the COVID-19 pandemic.

"In our heads, we are thinking that the race is going to Paris," he said.

"There is no plan B and in my view, and in the view of my colleagues, the winner of the Tour de France is the winner after 21 stages. It is hard to imagine the Tour winner after doing two, three, four stages, even the first week."