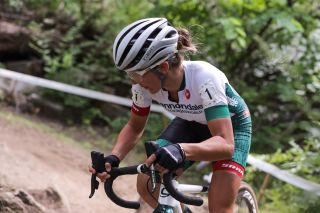 American Kaitie Keough has abandoned her recent European cyclo-cross campaign early and returned home to Colorado after a series of lacklustre performances, according to her Cannondale-Cyclocrossworld team.

"After struggling to find the consistent, high level form that @kaitiekeough has had in the past, she has decided to return to the US as of December 26th," the team wrote in an update on Instragram.

"While at her home in Colorado, Kaitie will undergo a battery of tests, as well as make some adjustments to her training," the team wrote. "Her return to racing is unknown at this point."

Katie Clouse secures U23 women's title at US cyclo-cross championships

The 27-year-old took her first UCI World Cup podium in 2015, and her results peaked in 2017 when she finished second in two UCI World Cup races and scored multiple top 10s. Her performance slid a bit in 2018, but Keough was able to take several wins during the season and a top-10 in the UCI Word Cup series.

Keough has missed out on a win so far this season, but she appeared to be gaining form in November with fifth at Koppenbergcross, fourth at Superprestige Ruddervoorde and eighth at the Tabor World Cup.

Her results started to slide from there, however, as she was 13th at Flandriencross and 19th at the Kokijde World Cup. She returned to the States to challenge 15-time US champion Katie Compton at nationals but finished a disappointing fifth in a race won by 22-year-old Clara Honsinger.

A return trip to Europe netted a DNF at the Namur World Cup on December 22, and Keough decided to pull the plug in hopes of resetting in time for the UCI Cyclo-cross World Championships in early February.

Cannondale-Cyclocrossworld also announced that US under-23 champion Katie Clouse suffered a dislocated shoulder in a crash at Namur but has already resumed light road training. Clouse is expected to be out of action for "a short period," according to the team.