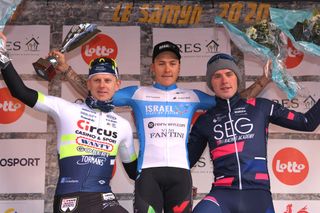 Dutch WorldTour team Jumbo-Visma have announced the signing of current Dutch under-23 road race champion David Dekker, who will join the squad for 2021 from Continental team SEG Racing Academy.

"I'm very happy to have signed with Team Jumbo-Visma," the 22-year-old said on the team's website on Wednesday, having signed a two-year contract. "Besides the fact that it's a Dutch team, the team is growing tremendously.

"Currently, it's one of the best teams in the WorldTour. I think I can make optimal use of the facilities that Team Jumbo-Visma offers to become the best cyclist within my capabilities," said Dekker, who is the son of former pro rider Erik Dekker.

So far this year – having joined SEG Racing Academy from another Dutch Continental team, Metec, at the end of last season – Dekker has taken part in three one-day races, winning two of them and finishing third at the other.

In between those two victories, however, and arguably even more impressively, Dekker finished third at the UCI 1.1-ranked Le Samyn, where he was up against a host of WorldTour teams, and was only beaten by Israel Start-Up Nation's Hugo Hofstetter and Circus-Wanty Gobert's Aimé De Gendt.

"If you look at the past few years, I think this is a logical step in my career," Dekker added of his upcoming move to Jumbo-Visma. "I've made great strides in my development. With that, I enforced this transfer, and I hope to focus on sprinting in the coming years. I can learn a lot from a big sprinter like Dylan Groenewegen."

Jumbo-Visma sports director Merijn Zeeman added: "David has developed well at Metec in recent years. This spring, he finally broke through at SEG Racing Academy with good performances in the few races that were held.

"We think he is a talented sprinter who can continue to grow in our structure. He is going to have many opportunities," Zeeman said. "In recent years, we as a team have learned a lot from training Dylan. David can take advantage of that."