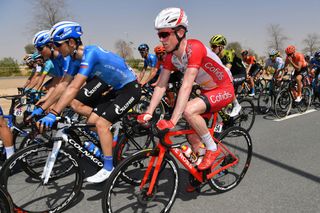 The current coronavirus crisis that is causing the cancellation or postponement of a number of races, with more expected to be called off in the coming weeks and months, will cause havoc for those riders in 'contract years', who need to show what they're capable of in the hopes of securing places on teams for 2021. One such rider is Cofidis climber Jesper Hansen.

Hansen told Danish newspaper Ekstrabladet on Monday that he's continuing to train in the hope of being ready for whatever his next race turns out to be, but that he – and a number of other riders – are in a difficult situation.

"I want to race to try to earn myself a new contract, so it's a real shame that the racing has ground to a halt," Hansen told Ekstrabladet.dk. "But there's nothing that you can do other than keep training and try to keep some kind of form, and just hope that it's soon all over.

"I have no real idea how hard I should be training," he said, echoing a number of colleagues who have no definitive goal as the situation stands. "So I'm just doing a range of different distances, and am hoping that I might get two-three weeks' notice before my next race so that I can then do some extra-hard intervals in the lead-up to it."

Twenty-nine-year-old Hansen joined Cofidis in 2019 after two seasons with Astana. From 2014-2016, he rode for Danish-Russian WorldTour team Tinkoff-Saxo, with whom he won a stage and the overall title at the 2015 Tour of Norway.

The Dane's 2019 season was interrupted by sickness, although he did ride to seventh overall at the Tour of California in May. This season, he's already raced the Tour de la Provence, finishing 30th overall, and the ill-fated UAE Tour, which was cut short two days before the end due to the coronavirus, leaving Hansen as one of the Cofidis team members in quarantine in their hotel for more than a week.

According to Ekstrabladet, Hansen's spring programme was set to include the Volta a Catalunya, the Tour de Romandie and the Giro d'Italia, all of which have now been cancelled or postponed.

"It's not good, as I was hoping to have done well in those races," said Hansen. "On the team, there's been talk that we won't race again until June at the earliest. If that's the case, we'll just have to hope that many of the postponed races might be able to run concurrently with the Critérium du Dauphiné and the Tour de Suisse [in June]."

With the Tour de France – providing it happens – set to start on June 27, due to this year's Olympic Games, Hansen hopes that July will also see a number of postponed races run.

"It'll be needed because of course everyone will be very keen to race after such a long break," Hansen said, "and there's no room for all of us at the Tour."