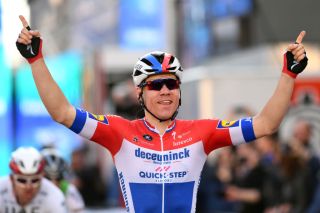 Fabio Jakobsen (Deceuninck-QuickStep) continued where he left off in 2019, with the Dutch national champion claiming his first victory of the season in Spain’s Volta a la Comunitat Valenciana, five months after his last win on the final stage of the Vuelta a España in Madrid.

After losing on stages 1 and 3 to Dylan Groenewegen (Jumbo-Visma), Jakobsen narrowly outpaced his compatriot on the final stage of the race, thanks to a near-perfect lead-out through a technical finish with a series of right hand bends that strung out the peloton.

Groenewegen was well positioned at the final corner, but crucially Jakobsen did not have to fight for position and was ahead of him after an excellent lead-out from Davide Ballerini and timed his final acceleration perfectly to claim his first victory of 2020.

"The team has been working for three days in a row now and I wanted to win for them as much as for myself," the 23-year-old told Cyclingnews after claiming his victory bouquet.

Deceuninck-QuickStep have built a new lead-out for Jakobsen, with Stijn Steels playing a key late role, with Italy's Davide Ballerini as his new lead-out man. They played a huge role in Jakobsen's success in Valencia, as did his other teammates during the stage.

"If you finish twice second then you want to win, especially in this team, and it’s all the details as well. Split-second decisions are vital and today the team did great. I’m just over the moon that I could get the victory for me and for them."

Jakobsen has made winning and losing by narrow margins something of a specialty. In the Vuelta a España last year he beat his new Deceuninck-QuickStep teammate Sam Bennett by the tiniest of margins, and having lost by the minimum to Groenewegen on stage 1 in Valencia, he managed to get the better of his compatriot on the last possible opportunity in the race.

“In the end that’s sprinting, it’s never more than a bike length usually but it can be close, sometimes you get beaten close and sometimes you win close. But a win is a win," he pointed out.

Deceuninck-QuickStep shuffled their sprinters and lead-out line-up for the 2020 season but have kept on winning. Elia Viviani has moved on to Cofidis but Sam Bennett has replaced him and won twice on his season debut in Australia, with superb lead-out from Michael Mørkøv and support from Shane Archbold.

"First of all [Tim] Declercq and [James] Knox, after that [Remi] Cavagna, [Stijn] Steels and [Yves] Lampaert and then Davide Ballerini, those are names you want to have in your line-up, they put me exactly where I needed to be and they were magnificent," the Dutch national champion said in praise.

"I’ll do a lot of races with Davide, he’ll be my lead-out guy, and a good start like today for the season is really important."

Jakobsen will now go onto the Volta ao Algarve (February 19-23) before tackling Tirreno-Adriatico and then making his debut at the Giro d’Italia.

"The big goal for me this year is the Giro d'Italia, to win a stage there. I'm also going to do Tirreno-Adriatico and they will be my two big Italian goals," Jakobsen confirmed.