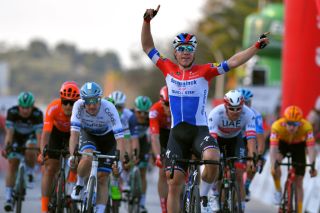 Fabio Jakobsen (Deceuninck-QuickStep) sealed win number two of his 2020 season on the opening stage of the Volta ao Algarve, sprinting to victory in Portimão for the second year in succession ahead of Elia Viviani (Cofidis).

The Dutch champion came out on top after a messy run-in to the line which saw Team Ineos lead it out for Ben Swift before Viviani and Jon Aberasturi (Caja Rural-Seguro RGA) took to the front, leaving Jakobsen boxed in.

"It was quite hectic, so it was not a lead-out by the book," said Jakobsen after the stage. "You have a guy in front of you with 400 metres to go, but in the end, sometimes it's better just to have a good position and then be able to do the sprint.

"The team was perfect. They controlled all day, controlled all the attacks on the harder part 15km from the finish, and then in the final, they kept me in front in a good position. I'm very happy with my condition and the way the team is riding."

The 23-year-old benefitted from his prior knowledge of the finale, having raced to victory in Lagos on stage 1 last year. Of the top ten finishers on the stage, Jakobsen is one of only two men to have raced the 2019 edition.

"I think every sprint stage suits me," he joked. "I know the final because I did it last year. It's about positioning and then having the legs. I love the finish because it's a long straight with plenty of room. This time, I was more closed-in than last year, but fortunately, I was able to get out."

Jakobsen will have a chance to add to his tally during Saturday's penultimate stage to Tavira, the only other possible sprint finish in the race. Deceuninck-QuickStep will race for Remco Evenepoel's GC ambitions, and after the stage, Jakobsen said the team wants to win as much as possible during the remainder of the race.

For Jakobsen, his win in Lagos takes him to two for the year, a mark he didn't reach until April in either of his first two seasons. Between victory here and his win on the final stage of the Volta a la Comunitat Valenciana, it has been a perfect start to his third pro season, he says.

"It is. You know when you do a good winter you hope that you can win and yes, if it works, then it works. It's amazing to win here again and I'm happy."