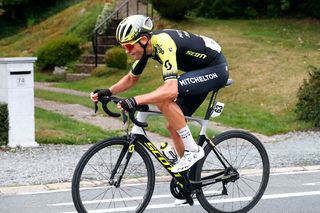 New Zealand's Jack Bauer has extended his contract with Mitchelton-Scott into 2020, which will be the 34-year-old's third season with the Australian WorldTour outfit.

Youth and experience to combine for Mitchelton-Scott at BinckBank Tour

"I'm very happy, as it's been a great two years that I've had with the team so far," Bauer said in a press release. "I've been around the block, but I feel like I've learned a lot in this team and made some really great relationships. I really enjoy everything about the team: it's a great squad on a personal level, but it's also a really high performing and innovative organisation.

"In terms of that, I'm really happy to be here. It suits my personal goals and ambitions, and just my style as a rider, so I'm excited to be here for a third year," he said.

Bauer will enter his 13th year as a professional in 2020, having in the past ridden for British team Endura Racing, Garmin (now EF Education First) and Quick Step, with victories having included stages at the 2011 Tour of Utah and the 2016 Tour of Britain.

"Number one, I'm here to do a job," Bauer continued of his role at Mitchelton-Scott. "I'm here to work for the team and I take that very seriously, being a reliable teammate and being ready to support the team's overall goals and ambitions race to race.

"Personally, I'd like to take some opportunities when they come," he said. "They're few and far between, but I try my best when they do come my way. I'd like to have a little bit more responsibility when it comes to the spring Classics next year, too. That's a goal for me."

Bauer admitted that he's "not the most outspoken person", but added: "I believe the way you carry yourself and the day to day example you set is important, and in cycling you spend so much time together.

"We move as a group, we live as a group and we train together. The example that Mat Hayman and Michael Albasini have set for me is definitely something I aim to try to replicate for the younger guys in the team, and I hope to pass on what I know," Bauer said, referring to his two older teammates on the squad, with Hayman having retired following this season's Tour Down Under before taking up a sports director's role on the team.

"Jack is part of our engine room," said head sports director Matt White. "He did a great job at the Giro d'Italia, and has had a very consistent year throughout. So we're very happy to extend Jack's career with us, and we see big value in what he can deliver for this organisation."