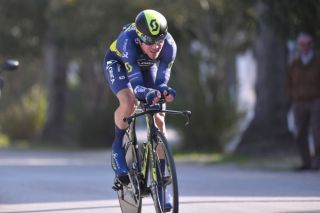 Michael Hepburn will remain with Mitchelton-Scott through to the end of the 2021 season after signing a two-year extension with the team. The Australian has been a part of the GreenEdge set up since its formation in 2012.

"I have been with the team since the start, I think there’s only about four or five of us left from the very start so I feel like I really know the team well," Hepburn said in a statement released by the team on Friday.

"It feels like a family environment to me, with all the riders and staff, and there’s nowhere else I can see myself at the moment."

The 28-year-old has a strong time trialling and pursuit background, winning six world titles on the track as well as silver medals in the team pursuit at the Olympic Games in 2012 and 2016. In recent seasons, Hepburn has established himself as part of the supporting cast around Mitchelton-Scott’s general classification leaders.

"We have got guys that have won Grand Tour stages and a guy that has won a Grand Tour and we’ve got a few other guys that are well and truly capable of getting podium places in big races, so I see my role as being a support rider to those," Hepburn said.

"We’ve seen a big shift over the last four or five years with the team’s targets and goals and with the young riders coming up and turning into some of the best GC riders in the world. We’re all aware that of our jobs and being a part of the engine room is something I really enjoy doing."

Hepburn rode in support of Adam Yates at this year’s Tour de France, and directeur sportif Matt White said that the Brisbane native has matured into one of Mitchelton-Scott’s road captains during his tenure with the team.

"He is an integral part of our team, he enjoys winning, and we enjoy having him. I think he will continue to grow into a leadership role in the coming years, he is still relatively young, but he knows how this team functions and he really wants to move into that role," White said.

"We have some older guys in the team who will hopefully finish their careers with us, but there’s a lot of guys in the team younger than him and he is a guy that can lead by example on and off the bike."