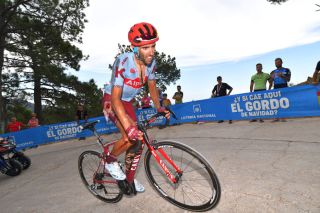 Katusha-Alpecin's Dani Navarro shows the spoils of a crash on stage 7 of the 2019 Vuelta a España (Image credit: Getty Images)

Israel Cycling Academy have signed Spanish climber Dani Navarro and Belgian all-rounder Jenthe Biermans for 2020, both of whom join from Katusha-Alpecin, the team has announced.

Katusha-Alpecin riders to be paid from UCI bank guarantee

The Israeli Pro Continental team's acquisition of Katusha-Alpecin's WorldTour licence for 2020 raised the question of what would happen to those riders already contracted to Katusha for next season, which included Navarro and Biermans, although two other already contracted riders – Mads Würtz Schmidt and Rick Zabel – were announced as ICA riders last week.

Navarro nevertheless made no secret of his relief at having signed with the new WorldTour outfit.

"I had to go through many months of not knowing what would happen next," he said in a press release. "Since May, we've been living under that cloud. When the news finally came that I'd get the chance to continue with ICA, it was a moment of happiness and tranquility."

Navarro spent six seasons at Cofidis before joining Katusha at the start of the 2019 season. The 36-year-old has ridden as a professional since joining Liberty Seguros in 2005, and went on to ride for Astana and Saxo Bank. He has four career wins, which include a stage victory at the Vuelta a España in 2014 and a stage win at the 2010 Critérium du Dauphiné.

Navarro added that he was looking forward to racing with ICA, having "followed them from afar".

"My impression is that they give their riders the chance to race with great support and calm," he said. "This is what I'm looking for now: to enjoy cycling again and to reward the Israeli team with what I've got to offer.

"And I believe I have plenty to offer. I endured a difficult year with a crash at the Giro d’Italia that cost me six crucial weeks," continued Navarro, referring to the crash on stage 4 of the Italian Grand Tour that also resulted in Sunweb's Tom Dumoulin leaving the race, with Navarro suffering a perforated lung along with a broken collarbone and broken ribs.

"But now I'm healthy and ready again," he said. "I'm a climber, and used to work helping riders like Alberto Contador, Lance Armstrong, Andreas Klöden, Roberto Heras, and many more. Now I can offer the same for Dan Martin and Ben Hermans in the mountains, and overall be strong for the team."

Twenty-four-year-old Biermans joins ICA off the back of three seasons with Katusha-Alpecin, riding his first Grand Tour – the Giro – with them in 2019.

However, it's the one-day Classics that are the Belgian's first love, which is hardly surprising given his success in such races as a junior and under-23 rider.

"That was where my love for the Classics really started. As a young kid, it opened my eyes to how big cycling and the Classics are in Belgium," said Biermans. "And then, in the U23 category, I was second twice at Paris-Roubaix.

"So the Classics have always been my focus, and I hope to be one of the key riders in ICA's Classics team in 2020," he said.