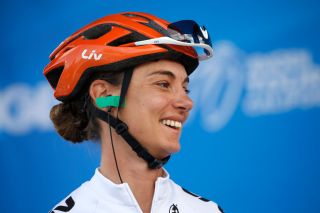 At the weekend, as COVID-19 lockdown measures were eased in Spain, Ashleigh Moolman Pasio (CCC-Liv) ventured outside for the first time and headed straight for her local climb of Rocacorba near Girona. She climbed it three and a half minutes quicker than she’d ever done before.

The South African reached the top of the 9.9km climb, which averages just over seven per cent, in 31 minutes and nine seconds, bolstering her own ‘Queen of the Mountain’ ranking on Strava.

Given the length of the climb and the fact she has ridden it countless times, it was quite the jump in performance.

The secret behind the success? Riding indoors.

How to get fit fast and smash your goal event

Speaking to reporters after winning two stages of the Zwift Tour for All online race series this week, Moolman Pasio described herself as a "real deal authentic Zwift convert", explaining she had initially turned her nose up at the idea of riding a static bike.

"I had a bit of a mental block towards it. I thought ‘why would I ever need to use that?’ I live in the cycling paradise of Girona," she said.

"But when the lockdown hit, I decided I could make my life miserable dwelling on what I don’t have access to, or I could embrace it and try and work on my weakness and make the most of it."

While the Zwift platform attempts to replicate the real life feel of road riding and racing, many pros have noted differences in riding style as well as results. Moolman Pasio, a lightweight climber, said she has become more powerful as a result.

"In the beginning, the intervals I had to do on Zwift were really hard and I was struggling but I tried to push through it then I suppose three weeks in I started to see a big adjustment, and I started to feel I was building strength," she said.

"The reality is that when you train indoors, you rely more on brute force, on your torque or power, and in the real world I'm more of a high cadence typical climber type of rider, and I knew that force is a bit of a weakness of mine. So I just embraced it and tried to work on it as much as I could.

"I had some reassurance from a power test where I saw my numbers had gone up. It was just this continuous realisation of the benefits of indoor training. Then the first day lockdown restrictions lifted, I went straight for Rocacorba and did a pretty awesome time up there. It makes me realise there really is a place for both Zwift and the real world."

While Moolman Pasio is now able to train in the real world, she should be racing in it by August, according to the rearranged 2020 calendar unveiled by the UCI on Tuesday.

In fact, the announcement came as she was in the early kilometres of her victory on stage 2 of the Zwift Tour for All, with her husband informing her of the news of a women’s Paris-Roubaix in October.

"Wow, it's really awesome," she said. "From the beginning, I realised early on in lockdown that there is always opportunity in challenging times likes these but sometimes it takes shifting your mindset to be able to see the opportunities.

"It just shows there is opportunity for women's cycling after the lockdown and it's pretty awesome to have a women's Paris-Roubaix. The women's peloton is definitely ready for it, we’ll be hungry to go prove ourselves in a really tough race like that, so I’m super excited.

"In terms of the calendar in general, I’ve managed to find my place in the lockdown and my enjoyment in it. I get a real pump out of riding indoors, but I'm really happy to hear a calendar has been announced and there is hope we’ll be racing outdoors towards the end of the year. I just hope it does materialise."