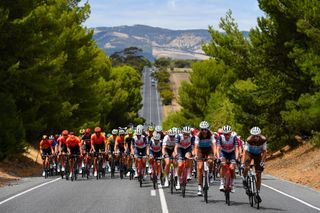 The men's peloton on stage 6 of the 2020 Tour Down Under (Image credit: Bettini Photo)

While professional cycling teams are left desperately hoping that the proposed, revised 2020 UCI calendar will be able to restart with Strade Bianche on August 1, a number of team bosses have highlighted to the French press just how vital the Tour de France is to their continued survival.

French sports newspaper L'Equipe spoke to a number of past and present WorldTour team managers, and the consensus was generally the same: that the existence of even the sport's biggest teams is precarious, and that the Tour de France – rescheduled for August 29-September 20 – remains king when it comes to the interest of current and potential sponsors.

While the subject of teams receiving a portion of television rights is a recurring theme when it comes to teams' survival, those on the ground are not convinced that it would make much difference.

"We are not talking about millions of euros like in football," Arkéa-Samsic team manager Emmanuel Hubert told L'Equipe on Tuesday. "For us in cycling, it might help to be able to afford a new rider or a new Pullman [team bus]. We're maybe forgetting that the Tour de France offers 70 per cent visibility to our sponsors. It is give and take. Without the Tour, cycling would die."

Lefevere: The cycling model could collapse if the Tour de France is cancelled

"We are light years away from football or Formula 1," he continued, agreeing with Hubert about the scale of any money coming from TV rights, with L'Equipe stating that only the three Grand Tours, cycling's Monuments – the five biggest one-day races – and the World Championships generate any significant amount.

In addition, Hubert pointed out, cycling teams operate in a very different way compared to a standard business model.

"The precariousness of our sport comes essentially from the very short duration of our sponsorship contracts," he explained.

"The difference is that a [non-cycling team] company will think about reinvesting, while we'll try to optimise the performance of our team with a rider, because that's the only way we'll keep a sponsor. Success for us is if the team has done well – not because there's €5 million in the fund at the end of the season," Hubert said.

'We're all in the same boat'

"A sponsor can break their contract overnight," pointed out Marc Biver – the former director at the Swiss arm of sports management company IMG, and later the general manager at Kazakh WorldTour team Astana – but pointed to the big budgets of teams such as Team Ineos having driven up riders' salaries, making things increasingly difficult for teams with less generous budgets.

"Team Sky, now Ineos, caused wage inflation by offering lieutenants who would be leaders in any other team at the price of gold," Biver said.

Bigger teams can have around 70 employees on their books these days, and L'Equipe estimates that 75 per cent of most teams' budgets goes on salaries – on team staff as well as the riders.

As a result of there being no racing due to the coronavirus crisis, a number of WorldTour teams – including Mitchelton-Scott, Lotto Soudal, Astana and Bahrain McLaren – moved to temporarily reduce the salaries of riders and members of staff, while staff on some teams were furloughed. CCC Team, meanwhile – home to the likes of Olympic road race champion Greg Van Avermaet and former European road race champion Matteo Trentin – is set to lose its main sponsor at the end of the season, according to a number of sources, due to shoe retailer CCC having had to close their shops during the pandemic.

"In 15 years, my budget has increased by 50 per cent and travel costs have increased to the same extent," said Deceuninck-QuickStep boss Patrick Lefevere, whose Belgian team has finished as the number-one-ranked squad in the world for the past three seasons.

"Even the premises of my service course [team headquarters] are rented. I only own my three Pullmans and workshop trucks," he said, with most teams' cars and bikes included in their sponsorship deal.

"The gains of the Tour de France are offset by the costs incurred at races where there is no profit, like at Flèche Wallonne and even Liège-Bastogne-Liège," Lefevere added.

"The time is not for conflict, and it is certainly not the coronavirus that will change the system," he stated. "We must first think about our survival, and we will all succeed together: the UCI, the teams and the organisers. We're all in the same boat."