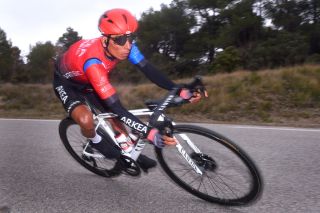 Arkéa-Samsic has set the lofty ambition of taking on, and trying to beat, the world's very best WorldTour teams at the Tour de France this summer thanks to the outstanding spring enjoyed by the French outfit's new signing, Nairo Quintana.

Quintana's stage wins and overall victories at both the Tour de la Provence and the Tour des Alpes Maritimes et du Var, and victory on the final stage of Paris-Nice, have lead his new team to start dreaming of winning the biggest race of them all, although the Tour – set to start this year on June 27 – of course has to happen in the first place in the current coronavirus climate.

"I know what great things he's capable of, and have known since he turned professional," said Ledanois, who was a directeur sportif at Quintana's former team, Movistar, when the Colombian joined them in 2012.

Since then, Quintana has won the Giro d'Italia (in 2014) and the Vuelta a España (2016), and twice finished on the podium at the Tour de France, taking second in 2015 and third the following year.

"Now, our focus is going to be on the Tour," said Ledanois. "Nairo is going to recover from Paris-Nice, and then we'll have to see what happens with regard to the current [coronavirus] situation."

While the sport's professional riders are now facing an enforced break from racing, Quintana is set to return to Colombia in the interim, "so as not to be away from his family for too long", according to Ledanois, and where Quintana will face a mandatory 14-day quarantine after entering his home country from abroad.

He said he was happy to do it and thanked everyone for their support.