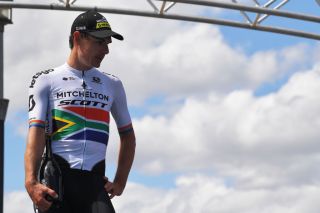 Despite the disappointment of missing out on a third straight Tour Down Under title, normal service was resumed when the 35-year-old returned home to race the time trial in Mpumalanga.

He clocked 41:52 on the 36km course to beat NTT Pro Cycling's Stefan de Bod, who was second last year, by 40 seconds. Kent Main (ProTouch) took the final podium spot at more than two minutes back.

"The race itself was pretty tough, it was quite difficult coming from the Tour Down Under and Australia, then backing up four days later to do a time trial, but I managed the course really well and came in the best I could considering the jetlag," Impey said.

Impey has won the South African time trial title every time he has entered. His first title came in 2011 and, after not competing in 2012 – when Reinardt Janse Van Rensburg won – he has now won the past eight editions.

"It’s always nice to bring the jersey back to Europe and, doing it for the ninth time, it’s been quite a nice run so far. It’s just nice to represent my country with the South African flag for another year, I think that’s important," Impey said.

Impey will also line up in Sunday's road race at the South African nationals. He has won that title twice, in 2018 and 2019, and so will be looking to do the time trial-road race double for a third year in a row.

"Sunday is now the goal and I will do everything I can to try and retain the jersey," he said.