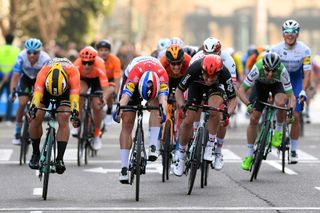 Lotto Soudal and Deceuninck-QuickStep have each had to make last-minute changes to their teams for the Volta ao Algarve, which starts in Portimão, Portugal, on Wednesday. John Degenkolb is unwell, and will be replaced at Lotto Soudal by Jon Dibben, while Iljo Keisse will come in for Deceuninck-QuickStep to cover for Davide Ballerini, who is also sick.

Degenkolb made his debut for his new Lotto team at the Volta a la Comunitat Valenciana earlier this month, taking third place in the bunch-sprint finish to the final stage in Valencia behind Fabio Jakobsen (Deceuninck-QuickStep) and Dylan Groenewegen. The 31-year-old will hope to recover quickly in order to start his spring Classics season at the Omloop Het Nieuwsblad on February 29, and his programme then includes Milan-San Remo on March 21 – a race that he won in 2015 – and Paris-Roubaix on April 12, which he also won in 2015.

Degenkolb's replacement, Dibben – also a new addition at the Belgian WorldTour team this year – made his debut at the Tour Down Under in Australia last month, and will now start his European season at the ProSeries stage race in Portugal.

Degenkolb: Winning another Paris-Roubaix would be the biggest dream

Over at Deceuninck-QuickStep, Ballerini – who joined the team from Astana at the start of 2020 – has already got his season under way at the Volta a la Comunitat Valenciana, and, like Degenkolb, will be hoping to be ready for his own spring Classics programme.

Veteran Iljo Keisse comes in for Ballerini, ready to build on his busy early season, which has already seen him race at the Tour de la Provence since returning from Australia, where he was part of the team that helped Irish road race champion Sam Bennett to a stage win at the Tour Down Under and victory at the Race Torquay before Dries Devenyns took the win at the Cadel Evans Great Ocean Road Race.

Change of plans for this week’s Volta ao Algarve: @IljoKeisse replaces @ballero_94, who will miss the race through illness.Photo: Sigfrid Eggers pic.twitter.com/5HaFQESgNkFebruary 17, 2020