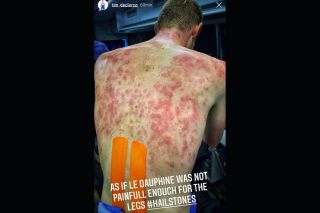 The finish of stage 2 of the Critérium du Dauphiné was battered by a brutal hailstorm on Thursday afternoon, catching out a chunk of the peloton as they rode to the finish atop the Col de Porte and the crowds along the road.

Primož Roglič (Jumbo-Visma) had long since taken the stage victory and overall race lead, but even the Slovenian was affected by the storm, his wife and young child forced to seek shelter in the car of Cyclingnews reporter Peter Cossins

Deceuninck-QuickStep domestique Tim Declercq posted a photo to Instagram of vicious-looking welts on his back suffered after taking hits from the hail, while B&B Hotels-Vital Concept neo-pro Maxime Chevalier had a similar injury.

Other riders caught up in the storm while they were still riding included Tony Martin (Jumbo-Visma), who sought shelter under a fan's rubber raft, Luis León Sánchez (Astana), and Jérôme Cousin (Total Direct Énergie), who finished 14 minutes after the time limit haven taken shelter further down the climb.

A video taken by Groupama-FDJ directeur sportif shows a large group of riders making their way up the climb in the heavy hail. The video shows 22 riders, including Peter Sagan (Bora-Hansgrohe) and Alexander Kristoff (UAE Team Emirates) passing through before Dan Martin (Israel Start-Up Nation) passes, almost coming to a stop before heading off again.

Many Riders - including our boys - were hit by one hell of a hail storm - worst Than anything we expirienced. The scene was total chaos and mayhem. .. riders running for cover, hit hard by icy mini ping pong balls. #CriteriumduDauphine @dauphine pic.twitter.com/Y6XI0PCSRsAugust 13, 2020

Within seconds the road looked like a ice rink and riders were desperately trying to stay on their bikes ... or to decide to walk up to the finish line on the ice... #criteriumdauphine @dauphine pic.twitter.com/u5UN2SM43FAugust 13, 2020

Ferocious hailstorm at the finish on the Col de Porte. We’ve just taken in a mum and her baby who were caught in it. Podium ceremony was still going on until the inflatable roof came down as Bernal was getting the white jersey #Dauphine pic.twitter.com/4kh5owHDsQAugust 13, 2020

🌩 Crazy weather at the finish of stage 2 at the #Dauphine 🇫🇷, happy to report all our guys finished safely.#UAETeamEmirates #RideTogether pic.twitter.com/0DZnPy0KRnAugust 13, 2020