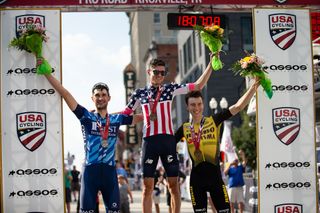 Current US road race champion Alex Howes will stay with the EF Education First WorldTour team through the 2021 season, the squad announced on Wednesday.

Howes is the rider who has had the longest running tenure with the American team, having signed his first WorldTour deal when it was Garmin Sharp in 2012.

"The team has changed a lot over the years, but the core ethos and mentality of the team has always remained the same," said Howes. "We've always been the plucky underdogs who find ways to win with craft and grit. That mentality has really resonated with me and keeps me coming back."

Second chance for Howes after extended period off the bike

Howes, who finished on the podiums of the Tour of Alberta and Colorado Classic, also won stages in the Tours of Utah and Alberta, the Colorado and Cascade Classics and the USA Pro Challenge and Tour of the Gila in addition to the mountains classification in the 2017 Vuelta al Pais Vasco, had a frustrating 2018 season until he was diagnosed and treated for hyperthyroidism.

Since then, he turned around a run of frustrating results in the US national championships when he won in Knoxille this June ahead of Stephen Bassett and Neilson Powless.

"Racing in the jersey has been a dream come true," Howes said. "Every time I pin a number onto the USA national champion's jersey, I get goose bumps. I cannot wait to wear it in some big European races next spring."

Team CEO Jonathan Vaughters called Howes "an intelligent and well-spoken member of this team since he was 13 years old".

"Wearing the stars and stripes is a just reward for all Alex has put into this sport," Vaughters said. "We couldn't be more excited about helping him show off the jersey in 2020 – and hopefully beyond, too."

Howes was one of several riders this season to take on an 'alternative racing calendar', participating with Lachlan Morton and Taylor Phinney in events like the Dirty Kanza and Crusher in the Tushar gravel grinders and the Leadville 100 ultra-endurance mountain bike race, and he intends to continue to do so.

"Alternative racing puts a giant smile on my face from early pre-dawn start to late afternoon finish," Howes said. "These grassroots type events have my heart."