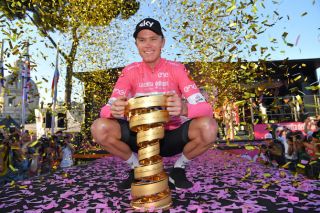 The 2020 Giro d'Italia might be postponed due to the COVID-19 coronavirus pandemic, but that doesn't mean that you can't enjoy past editions of the race via streaming services.

In the run-up to what would've been the 103rd running of the Italian Grand Tour, Eurosport are airing highlights from the 2017 and 2018 editions of the race – two modern classics.

Read on to find out how to watch these Giro d'Italia highlights – via live stream, no matter your location, with ExpressVPN.

The 2017 race, which is being shown in three-part chunks every day (from 8am CEST and repeated at 5pm CEST) saw Tom Dumoulin take victory after a battle with Nairo Quintana. The Dutchman made time in the time trials while the Colombian battled back in the mountain stages, including a memorable stage 16 to Bormio.

Elsewhere in the race, Bob Jungels wear the pink jersey for the second year in a row, while Fernando Gaviria dominated the sprints in his debut Grand Tour.

The following year saw Chris Froome triumph at his first participation in the race in eight years. The race, which is available to watch anytime via Eurosport Player, saw reigning champion Dumoulin locked in battle with Simon Yates for much of the race as Froome struggled with multiple crashes in the first half of the race.

Froome came back with a win on Monte Zoncolan, but few would've suspected what was to come on the Colle delle Finestre on stage 19...

Highlights of both editions of the race are available via Eurosport, with the 2017 race aired 'live' each day. Highlights packages of three stages are shown every day at 8am CET and 4pm CET.

The 2018 race, meanwhile, is available to view in full – via hour-long stage highlights – on the Eurosport Player online.

Eurosport is available via satellite television packages or online throughout Europe as well as select Asian countries such as Israel, Thailand, Malaysia, Indonesia and the Philippines, plus Australia.

Available to view on Eurosport Player, anytime of the day.