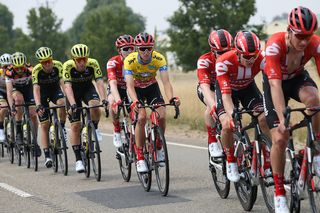 Unless the time gaps between those who emerge as the top three riders on general classification come Saturday evening are still very small, the climb up to the ski resort is likely to decide this year's podium, with only stage 5 – on a relatively sprinter-friendly course around Melbourne's Royal Botanic Gardens – then left to race.

With 10, six and four-second bonuses available to the top three on stage 4, the list of possible overall winners remains long at this point. As well as the current top three of Hindley, Howson and Berwick, there's fourth-placed Neilson Powless (EF Pro Cycling), who's 23 seconds down on Hindley, while Hindley's teammate, Michael Storer, in fifth, and sixth-placed Jesse Ewart (Team Sapura Cycling) also sit within a minute of the race leader.

Groves sprints to victory on stage 3 of Herald Sun Tour

The tough, 15km climb up to the ski resort, which averages six per cent but has ramps of up to 13 per cent, will blow the race apart. An ambitious breakaway could well make it to the lower slopes with a slim advantage, but all the GC riders' teams will likely work hard to bring their men to the base of the climb in the best position – and condition – possible.

Having been awarded the leader's jersey for a second day following the conclusion of stage 3 on Friday, Hindley admitted to reporters, including Cyclingnews, that he was "pretty nervous" about trying to hold onto his yellow jersey on such a decisive stage on Saturday.

"But I'm really keen to give it a good nudge on Mount Buller," he said. "I've never done the climb before, and I think everyone has everything to race for, so there are going to be fireworks, I think."

Asked what he was planning to do to prepare for a climb he'd never ridden before, Hindley said that he was doing everything he could, bar riding it.

"I'm doing a fair bit. I'll look at the roads, look at the maps and Street View – that sort of stuff. I’ll do my homework – don't worry," he smiled.

His likely principal rival – and certainly his closest rival on the GC – is 2017 Herald Sun Tour champion Howson, who has both the benefit of experience and a strong Mitchelton-Scott team, although Hindley should also be able to rely on the climbing skills of Sunweb teammates Rob Power and Michael Storer.

Like Hindley and Howson, 20-year-old Berwick, meanwhile, finished safely in the peloton on stage 3, ensuring that the rider from Australian domestic team St George Continental kept his powder dry in readiness for Saturday's stage.

"I think we're going to see similar riders to the ones in the finale on Falls Creek," said Hindley, referring to the likes of Berwick, Howson and Powless. "Falls is a pretty honest climb, and once you get to the top you can't really hide. I think Buller sounds like it's a bit harder, but shorter, so I think it will be similar guys."

Asked whether he thought pre-race favourite and, more importantly, Howson's Mitchelton-Scott teammate, Simon Yates, was likely to be in the mix on Mount Buller, Hindley agreed that the British climber may well be.

"I think so. He possibly just had a bad one yesterday," said Hindley, referring to the Falls Creek stage on which Yates cracked and lost almost six minutes to the stage winner. "But he was looking pretty strong today, and I think he'll be going in all guns blazing tomorrow.