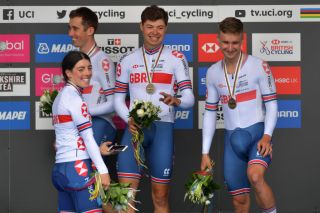 AG2R La Mondiale have announced the signing of Harry Tanfield. The Brit joins the French team from Katusha-Alpecin, which has been taken over by Israel Cycling Academy.

Tanfield turned pro with the Swiss-based team at the start of 2019 after impressing in the British Continental ranks with Canyon-Eisberg with a stage win at the Tour de Yorkshire. The 24-year-old has endured a tough debut season after suffering with a knee tendon injury for several months.

"We've had our eye on Harry for two years now, and this year we finally have the opportunity to recruit him," said AG2R La Mondiale team manager Vincent Lavenu.

"We are happy to sign such a talented rider, who will elevate us in the field of time trialing. Of course, we will count on him in the road races as well. And he will also play an important role in the group focussed on the classics."

With Katusha-Alpecin in limbo for much of the summer, Tanfield had been unsure about him future for several months. At last month's Tour of Guangxi, he admitted that that he didn't know what was going on with the team or his contract, while adding that he had been in contact with other teams.

One bright spot of his 2019 campaign was a bronze medal at the Road World Championships in his home county of Yorkshire. Tanfield was part of the Great Britain team that finished third in the new mixed relay team time trial event.

"I'm definitely very happy about this opportunity," said Tanfield in a team press release. "I will meet new teammates, get acquainted with a new structure, new equipment; it's really motivating!

"I want to continue to progress in my time trialing. I am still young and I still have many things to learn. I know that evolving within the group of specialists for the Flanders classics will be very rewarding. I cannot wait for the season to begin."

Tanfield was unveiled by the team in Vaujany in the French Alps, where AG2R are currently holding their end-of-season training camp.