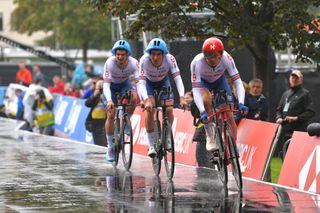 The Tour of Guangxi marks the final race of the 2019 WorldTour, and for Katusha-Alpecin the final WorldTour race as a professional team ahead of their pending takeover by Israel Cycling Academy.

Harry Tanfield, a neo-pro on for the Swiss team, is one of the riders caught up in the game of musical chairs after the merger, with only those with guaranteed contracts set to be part of the new-look squad.

Speaking to Cyclingnews before the race start in Beihai, the 24-year-old was hopeful about his future, but – as is often the case when teams merge or search for sponsors late into the year – he remains in the dark over exactly where his future lies.

"I've been speaking to a few [teams], yeah," he added. "Hopefully I'll be able to sort something out in the next week or two, but at the moment I'm still uncertain. It's just a shame that I can't show myself with all the shit going on."

What Tanfield refers to is a niggling knee injury that has stuck with his through the second half of the season. Gesturing to the front of his right knee, he said that he wasn't supposed to be racing in China but has had to make the trip regardless.

"This last half of the year has been pretty hard with more personal stuff going on," he said. "I didn't really want to come here in the end. I wanted to come here a month ago, but after the World Championships I was just cooked and yeah, the last few races I've had a bad knee. So, I've had to come."

Tanfield won a medal at his home Worlds in Yorkshire, forming part of Great Britain's mixed relay TTT squad that took bronze in Harrogate. Since then though, the youngster has been forced to DNF each of his last three races – the Sparkassen Münsterland Giro, Binche-Chimay-Binche, and Paris-Tours.

"I couldn't finish on Sunday in Paris-Tours, so then the good thing was that we've had no bikes for three days. So, at least I've had a chance to have a rest.

"I'm here, so I hope it won't hurt. You can't tell until you get on the bike, so I've just got to dig in and hopefully it's alright. It's a tendon near my knee and I've just been feeling it the last two months gradually getting progressively worse."

Guangxi is Tanfield's seventh WorldTour outing of the season, with the likes of the BinckBankTour and numerous Spring Classics a step up from racing with British Continental squad Canyon Eisberg in 2018.

Aside from his Worlds medal, fifth in the BinckBank Tour's stage 5 time trial has been a highlight of Tanfield's debut pro season, with opportunities coming more often than anticipated as a result of misfortune elsewhere in the team, which was only 24 riders strong even before Marcel Kittel's mid-season contract termination.

"It's not been a bad year really. I've had lots of good races to to," he said. "I think that the lack of numbers we've had because of injury and other reasons, I've had a good opportunity and a lot of races to actually do and stuff, so it's been really good. I've enjoyed it."

Coming to China to end his season would've been another prime opportunity to add to the list, but for Tanfield it's more of a wasted one, with the possibility that his problematic knee could see him quit the race early rather than risk aggravating it further.

"I enjoy racing in China. I've raced here in the past and I'm just gutted the fact that I don't really feel that fit and I haven't been riding because of my knee," he said. "It almost feels like a waste really, a wasted opportunity, but if it's alright then I might ride into it.

"So, yeah, I've just got to take it as it is each day. Survive today. We only got here like a day and a half ago, so I still feel half asleep right now. This is what, the early hours of the morning in the UK. Sleeping was pretty hard.

"It's just a bit of a pain but it is what it is. If you're injured, you're injured and there's not really anything I can do about it. So, I've just got to hope that it's ok, hope for the best and hopefully it'll be alright."