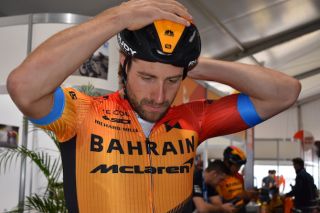 Marco Haller is one of numerous new additions to this year's Bahrain McLaren line-up, which also include Mark Cavendish, Mikel Landa and Wout Poels, as part of a team that has begun a new era for 2020, with increased involvement from McLaren and a new team principal in Rod Ellingworth.

Haller joins the squad following eight years with Katusha, which in turn has merged with 2019 Pro Continental team Israel Cycling Academy to become the Israel Start-Up Nation team in 2020.

"Having spent eight years at the same outfit, it's a big change, but I feel as though the change has come at the right moment. With Bahrain and McLaren partnering each other, it really feels as though this team has incredible drive, which makes it pretty unique, and I think other teams copying the partnership shows how smart they've been in going in the direction they have," said Haller, referring to Team Ineos partnering with the Mercedes Formula 1 team and the recent announcement that Israel Start-Up Nation will collaborate with the Williams F1 team this season.

How to follow the Tour Down Under 2020 – live stream, TV and results

"I feel very proud that I've come across to this squad, and I'm very much looking forward to seeing what this team can do in the future," he said.

Haller kicks off the new season with Bahrain McLaren in Adelaide, in South Australia, at Sunday evening's Schwalbe Classic circuit race – a prelude to the Tour Down Under WorldTour stage race, which starts with stage 1 in Tanunda on Tuesday.

"You couldn't call me a sprinter," smiled Haller, "but Sunday's Schwalbe Classic probably suits me the best out of everyone we've got on the team here."

The 28-year-old is too modest: Haller has a very fast finish, and Australian fans will remember him for his victory from the break in the opening race of the 2019 Bay Crits – with his consistency helping to sew up the overall series title. He was considerably less joyously, as a bloodied and bruised crash victim on stage 2 in Angaston at last year's Tour Down Under, although the Austrian recovered to finish in the front group the next day and finished the race last year.

He'll be hoping for a safer passage through this year's race next week, which is being billed as one of the toughest-ever editions of the Tour Down Under.

"It certainly looks to be a very demanding course," Haller told Cyclingnews on Sunday morning, "and in Rafael Valls we have a guy who has finished in the top 10 here overall on two occasions [eighth in 2016, seventh in 2017]. So we want to protect him, but we're obviously not in the same position as a team like Trek-Segafredo with Richie Porte, or Mitchelton-Scott with Daryl Impey, so we're going to wait and see what happens, but we'll certainly still be racing for the win.

"Stage 3 to Paracombe and stage 6 to Willunga Hill are kind of the 'queen stages' this year, where you can win the Tour Down Under, but I'd say that the stage to Murray Bridge [stage 4] is a stage where you could lose the race because you go through a lot of open, potentially windy, areas towards the end," he said.

Haller said that the team has done recons of most of this year's stages, and that everyone on the team is motivated to begin the season well as part of a team that has reinvented itself for 2020, with former Team Ineos performance director Ellingworth joining the management team alongside the likes of new riders Landa, Poels and Cavendish, while McLaren have stepped up their involvement and become the team's co-sponsor.

To top off the new-look squad, the team also has a brand-new orange-and-black kit for the new season.

"You obviously want to start the season well, and as a team we certainly have big aims this season," he said.

"For me, personally, I've first got my eye on the spring Classics, and then I want to put myself on the long list and hopefully make the Tour de France selection. The team has big goals for the race, of course, and so to make the squad for the Tour would be my ultimate goal for this year."