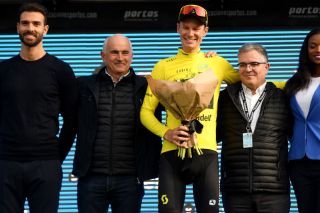 Best known for his performances in the mountains, Australia's Jack Haig (Mitchelton-Scott) has secured the first pro overall lead of his career in the Volta a la Comunitat Valenciana on what was, on paper, the most unlikely of circumstances - a bunch sprint.

The absence of time bonuses in Valencia and a fifth place on the previous day's first summit finish at Cullera, tied on time with stage winner Tadej Pogačar (UAE Team Emirates) is what kept Haig in contention overall.

Volta a la Comunitat Valenciana: Groenewegen comes back from crash to win stage 3

How to watch the Volta a la Comunitat Valenciana – live stream, TV, results

Haig recognised that stage 4's crucial, much tougher summit finish will surely split the overall apart and could change the overall completely. But he said that with the jersey within his reach in Valencia thanks to the placings rule, it was always going to be worth having a crack at taking it.

"It's quite interesting with the classification here, it's just off the sum [of placings] of the last three stages and we knew that I could potentially take the jersey," Haig told reporters.

"So it was semi-planned, but it wasn't a major objective for the day."

Haig laughed when asked how long it had been since he had mixed it up in a bunch sprint, saying "well it's been quite a while, and it was a bit sketchy, but it was not so bad."

As for Saturday's climb, Haig said, "I hope it's better for me, we're hopefully going to go see it this [Friday] afternoon after this stage finish, as it's quite close to the hotel. From what I've heard from the other riders, it's incredibly steep, so it'll be quite a battle. It's only five kilometres long, but it'll be quite an effort."

As for the significance of having the jersey and whether that will change his attitude to Saturday's stage, Haig said, "not really. It's a nice confidence boost, but my approach will be exactly the same. I'll just try and to my best, use the team well to try and be in the best position possible at the foot of the climb, and see what I have the legs when I get there."

Last year, Haig already showed that he could be in great shape very early in the season, with a seventh place overall in Valencia, sixth in the Vuelta a Andalucia, then fourth in Paris-Nice. Rather than him making an all-out effort to be in good shape from the word go this year, he said, he had no idea what his condition would be like.

"It's more the way it worked out. I was very unsure what I'd be like here, because I spent all winter at home in Andorra, so I had quite a lot of time skiing and to come here with such good condition is a very nice surprise."

Further down the line, Haig will follow an identical program to 2019, with the Vuelta a Andalucia followed by Paris-Nice. But for now, his focus is fully on retaining what he has now captured, albeit in somewhat unexpected circumstances, in the Volta a la Comunitat Valenciana.