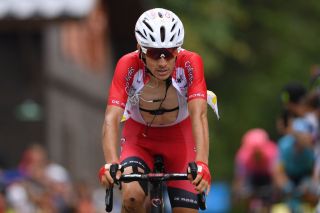 When Guillaume Martin (Cofidis) attempted to counter eventual stage winner Primoz Roglic's decisive attack in the final kilometre of stage 2 of the Critérium du Dauphiné on Thursday, the Frenchman underlined his fine form and the media interest in him, and now lies fifth overall at the race after finishing fourth on the stage behind Roglic (Jumbo-Visma), Thibaut Pinot (Groupama-FDJ) and Bora-Hansgrohe's Emanuel Buchmann.

"Roglic seems untouchable, although I wasn't too far off – perhaps not to catch him, but to at least just about hang on to him," Martin admitted to L'Equipe on Thursday.

"I was positioned a little too far back when he attacked, so I don't know if I might have been able to stick with him if I'd been right on his wheel," he continued. "I hope to be able to find out in the coming days by being better positioned.

"I'm nevertheless pleased with my performance," Martin said. "In the last few kilometres, I was back in the last two or three riders of the group, and so it was like making an attack just to get to the front.

Guillaume Martin: It's time for Cofidis to win a Tour de France stage

"But I've found myself among riders who have very strong teams around them, and who are used to riding against each other, and so when I'm up at the front, I get heckled a little," he revealed. "If I can show that I'm good enough to be there, though, it's going to be easier for me to impose myself that bit more."

The other, more established riders should already be getting used to Martin's presence at the head of affairs since the sport's restart after the coronavirus-pandemic shutdown: the 27-year-old Cofidis rider finished third at the Mont Ventoux Dénivelé Challenge in early August, and followed it up with fourth place on the final stage of last week's Tour de l'Ain, behind Roglic, Egan Bernal (Team Ineos) and Nairo Quintana (Arkéa-Samsic).

He was also fourth on the 'queen stage' of the Vuelta a San Juan in Argentina at the start of the season, and took a surprise 12th place overall at last year's Tour de France, while still riding for Belgian ProTeam Wanty-Gobert, which he's hoping to improve upon this year when the rescheduled Grande Boucle gets under way in Nice at the end of this month.

"Guillaume showed how comfortable he was on this sort of terrain," Cofidis sports director Jen-Luc Jonrond said on the team's website. "He's again benefited from the hard work done for him by his teammates, and really paid them back.

"Guillaume was smart enough to wait until the very end of the stage to go on the offensive, and we'll try to keep going like this for the remaining stages," said Jonrond.

"We need to make sure that the Cofidis jersey is respected by the best in the peloton, and we'll do that by continuing to string together some good results ," added Martin, who is just 18 seconds off Roglic's overall lead with three tough climbing stages still to come. "But I'm very happy with how today went, which bodes well for the days to come."