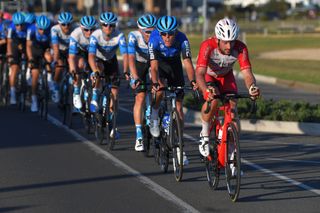 Uncertainty and a lack of information continue to cause havoc as riders and staff remain on lockdown at the UAE Tour and head towards their fifth day of enforced quarantine.

Most of the 600 riders and race ensemble have now left following negative tests for Covid-19 – also known as the Coronavirus – but all of the riders who were staying on the fourth floor of the teams' hotel have been forced to remain behind.

That includes Cofidis, Gazprom-RusVelo, and Groupama-FDJ after two riders reportedly began to suffer from fever-type symptoms. UAE Team Emirates have also remained in the country as a precaution.

"The team is frustrated because there's no news. We've been re-tested but not been told anything after that. As soon as we get results back we should be able to leave but we've heard nothing," he told Cyclingnews on Monday evening in the UAE.

"We were supposed to get results at 10am, but every time we asked for updates we just get the same story from hotel staff. There's one guy in a white jacket and he says that he's talking to authorities but he's not really doing much more than smiling."

Teams, riders and media were put in lockdown on Thursday night after two cases of Covid-19 were reported. They turned out to be negative after fresh tests, but two days later medical authorities were forced to return to the hotel to carry out further tests after several other individuals – on the fourth floor – claimed to have fevers.

Other than the two initial positives, that were eventually reversed, there have been no further positive cases.

"There's been no positive tests but just a few people with fevers and that's messed everything up," Haas said. "The biggest issue is that they've released hundreds of people and they were sharing the same space and eating at the same buffet. Then when they were leaving they said, 'well now everyone on the fourth floor has to stay'.

"They've dropped off bags of food our doors so it's gone from being equitable to this, and half the riders who left didn't have documents to say that they weren't positive. I don't think we're locked here because of extra worries but because the authorities are trying to show that they're trying to save face.

"That's how it seems to us. Everyone is fit and healthy and we all have team doctors here and they're checking on us and they're scratching their heads and think that this is insane.

"I'm nice and calm on it and have perspective but I'm starting to see people lose their heads. It's playing at peoples' patience. It's starting to cause pandemonium and I think it's only going to get worse."

Even if the riders are released in the coming hours and days they will have missed almost a week of training. That will have a huge effect on their spring seasons, and not to mention put a strain on teams who have to cope with a shortage of riders on their rosters.

Although the health of riders and the public at large is the greatest concern, Haas admits that without clear information the situation continues to cause problems.