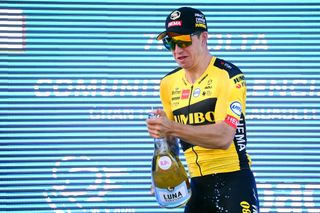 Dylan Groenewegen's propensity for hitting the ground running continued undiminished for yet another year as the Dutchman secured Jumbo-Visma's first victory of the season during stage 1 of the Volta a la Comunitat Valenciana.

Last year, Groenewegen struggled on a late climb in Valencia's first bunch sprint on stage 2 and finished off the pace. It wasn't until the final stage of the five-day race that he secured Jumbo-Visma's first win of the year.

Fast forward 12 months, and despite some lumpy terrain early on stage 1, Groenewegen had no such teething difficulties. His final battle with Fabio Jakobsen (Deceuninck-Quick Step) was a very tight one on the long, straight avenue leading to the finish in Vila-Real.

The 26-year-old was finally able to see off his compatriot for his first win since the Ronde Van Zeeland, his last race of 2019, last October. It was also Jumbo-Visma's third straight year of capturing their first season win in Valencia, with Danny Van Poppel's victory on stage 1 in 2018 preceding Groenewegen's wins in 2019 and 2020.

"There were a lot of roundabouts at the end and it was a really hectic final," said Groenewegen, whose 15 victories of 2019 made him cycling's most prolifical winner of the season.

"But the team did a really good job, everybody was fresh and they all want to win the first race of the season. But today the sprint was really good for me, a little bit of an uphill finish line and I'm really happy with that."

The key to success for sprinters is often said to be as much a question of self-confidence as it is of good form. Groenewegen confirmed that by saying that taking the first win of the season, on the first occasion possible, was really important for Jumbo-Visma.

"It was the first opportunity where I could win and to do that is really good," he said.

Groenwegen was as direct as usual when it came to why he prefers to continue to get the ball rolling in Valencia when so many other sprinters head to races like the Santos Tour Down Under to make their season debut.

Part of the answer lay in logistics, the other part simply because he was pleased with how he performed in the Spanish event and saw no reason to change.

"Maybe next year I'll go to Australia," he said with a smile. "We've been training around here, for one thing, but also I like this race."

Thanks to his stage 1 victory, the Dutchman is also in the overall lead at the Volta a la Comunitat Valenciana. He said he had no expectations of being able to keep command of the GC on Thursday's punchy uphill finish.

"It's too hard for me," he admitted. "I think it's for the climbers, but then I should get another chance on stage 3."

A third chance, too, will come on stage 5's finish in Valencia, identical to last year's finale - but after Wednesday's winning-sprint performance by Groenewegen, that goes without saying.