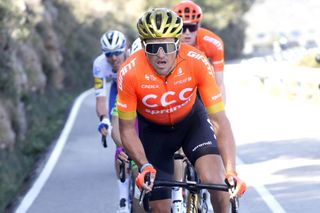 In response to the announcement by cycling's governing body, the UCI, and race organisers ASO on Wednesday that the Tour de France has been rescheduled to take place from August 29-September 20, CCC Team leader Greg Van Avermaet has expressed his satisfaction at having some race dates to aim at.

"I think it’s good to have a date in mind when we can maybe start," Van Avermaet said on his team's website. "It can still change, as it depends on how the virus develops, but I think for us riders it's really important that we have certain dates in our heads where you see big races popping up.

"I think, mentally, that's the most important thing, and, for sponsors, they can see an end [to the non-racing period] and when we can start riding again. So this helps us both ways," the Belgian said.

Van Avermaet: I don't have many chances left to win the real Tour of Flanders

Greg Van Avermaet: On top of the world

The UCI also announced that the majority of countries' national championships have been set for the weekend of August 22-23 – the week before the start of the Tour, as is traditionally the case.

However, the Belgian Security Council announced on Wednesday that it has cancelled all sporting events, mass public gatherings and major summer festivals until August 31, which could mean that the Belgian championships don't take place at all.

The UCI Road World Championships, meanwhile, have retained their original dates of September 20-27 – overlapping with the end of the Tour de France, with the elite men's elite time trial scheduled for September 20 but the road race not taking place until September 27 – while the new dates of the Vuelta a España, the Giro d'Italia and cycling's one-day Monuments have yet to be revealed, but will all likely take place after the Worlds.

"It's going to be busy, hopefully," Van Avermaet said of the upcoming August-September period. "We can see the Nationals, the Tour de France and World Championships together, so that will be a big block of important races.

"Afterwards, the Monuments will come in, because for me, I won’t do the Vuelta or Giro, I don't think. So for me, the one-day races will be really important. A big Grand Tour in the legs will help me to have some strong one-day Classics performances. So, for me, I hope it goes like this, and we will see how far I can come in the races," said the Classics specialist.

While the newly proposed Tour de France dates mean that the race is still some way off, Van Avermaet thinks that it will be to the riders' advantage, meaning that there's time to rest before restarting to build up full fitness for when the racing recommences.

"I need to discuss with my trainer now how we are going to approach the races in the best way possible," Van Avermaet continued. "I'll take a week off now as I have a little bit of knee pain, so I'm not riding anyway. It's good to recover. I was already thinking that I would keep training until the Paris-Roubaix weekend [originally planned for April 12] and then try to recover a bit.

"I think it takes a few weeks to really get to a competition level, but I think it is good now to know so we can also relax a little bit more, knowing when races will start so you don't have to train that much anymore and then build up towards some smaller races, and then the Tour de France," he said.