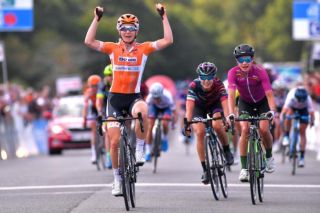 On August 31, the UCI Women’s WorldTour returns to the Breton village of Plouay for the 18th edition of the GP de Plouay-Lorient Agglomération Trophée WNT. Plouay is only a small village with fewer than 6,000 inhabitants, but it has a long tradition in cycling.

The men’s GP de Plouay was first held in 1931, and Plouay hosted the World Road Championships in 2000. 2002 saw the first edition of the women’s GP de Plouay, which has been part of the UCI World Cup and UCI Women’s WorldTour, respectively, since its inception.

The women’s race parcours for 2019 is changed slightly from last year. Though the total distance is not much longer – 128km compared to 125.5km in 2018 – the length of the circuits has been shortened. As a result, the peloton will do eight ascents of each climb as opposed to five, making for a significantly harder race.

The race starts with a long circuit of 16.7km, the short climb of the Côte de Moulin after 1.5km being a first springboard for attacks. A rolling section is followed by the descent to the Scorff river valley and a few flat kilometres. Then, a double climb awaits: the Côte du Minojenn du Calvaire on a narrow side road leads directly into the Côte de Ty Marrec on the departemental road.

In total, the ascent is about 1.5km long with maximum gradients above 10 per cent, and the Côte de Ty Marrec crests only 3.6km from the finish line. Six laps of this long circuit are followed by two laps of a shorter finishing circuit that replaces the rolling and flat sections with a more direct route, adding the short climb of the Côte du Bois de Kerlucas to the three other climbs.

Two former winners of the GP de Plouay will be on the start line. Last year, Amy Pieters (Boels Dolmans) won a sprint from a group of 14 riders. Having won the European road race championshipearlier this month, Pieters heads a strong Boels Dolmans team that includes another two potential winners in Chantal Blaak and world champion Anna van der Breggen. This strength in numbers could become crucial, as Blaak and especially Van der Breggen can be expected to attack in the finale, while Pieters is well-suited for a group sprint if the attackers are reeled in.

Eugenia Bujak (BTC City Ljubljana) won a small group sprint in a photo finish three years ago and, unlike Pieters or Deignan, the Slovenian will be the undisputed leader of her team. With a fourth and ninth place in the last two editions, Bujak confirmed that her 2016 victory was no outlier, and her recent results show that she is in good form.

Soraya Paladin (Alé Cipollini) has performed at an even higher level than before in the 2019 season, achieving excellent results in every race she has entered. The 26-year-old was close to winning in Plouay last year as she was caught only 200 metres from the line after a late solo attack. Paladin is not among the strongest sprinters, but she will hope to be part of the decisive attack again and not be caught this time.

Trek-Segafredo were originally to field Lizzie Deignan, winner in 2015 and 2017, but the British rider was left out of the team’s final selection as she prepares for the World Championships in her native Yorkshire. Instead, the team will be led by Elisa Longo Borghini and US champion Ruth Winder. Winder showed her good form with attacking racing and good results in Vårgårda and Norway, and Longo Borghini, with her experience and tactical nous, is never to be underestimated.

With Katarzyna Niewiadoma not on the start list, Elena Cecchini will be the leader of Canyon-SRAM. Beaten only by Bujak in 2016, Cecchini is well suited to Plouay and has reached the top 10 in each of the last four editions. She can follow attacks on the hills and still unleash a strong sprint at the end of a hard race.

Demi Vollering (Parkhotel Valkenburg) burst onto the scene this spring, turning heads as she immediately mixed it with the very best in her first season on a UCI team, culminating with a third place in Liège-Bastogne-Liège. As a strong puncheur who also has a decent sprint, Vollering is very well-suited to the Plouay circuit.

Team Sunweb’s line-up is led by Coryn Rivera and Leah Kirchmann. Rivera was third in the 2018 edition and is in striking form at the moment, evidenced by her second place overall in last week’s Ladies Tour of Norway. Kirchmann has similar strengths to Rivera, possibly possessing better climbing stamina while Rivera has the better sprint. Youngsters Juliette Labous and Liane Lippert should not be overlooked, either.

The Mitchelton-Scott squad does not feature a clear favourite, but the team can still be expected to be present in the finale. Amanda Spratt finished fifth in Plouay last year while Lucy Kennedy won the hilly Clasica San Sebastian earlier this month.

Movistar also send a well-rounded team including Breton rider Aude Biannic, who will have extra motivation on her home roads, Malgorzata Jasinska, who placed seventh in 2018, and Margarita Victoria Garcia, who finished sixth the year before.