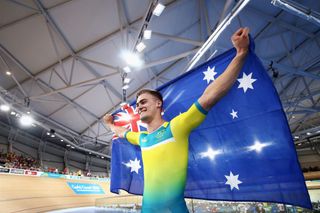 Australian track sprinter Matthew Glaetzer still has his sights set on competing at the 2020 Tokyo Olympics despite being diagnosed with thyroid cancer earlier this month. Glaetzer underwent surgery last week to remove a cancerous growth, and the 27-year-old plans to compete in races as usual going forward.

Glaetzer felt soreness in his neck back in October and initially mistook the pain for a strained neck potentially suffered during strength training. After the pain didn't subside with regular physiotherapy sessions, Cycling Australia sent him for further testing, where MRI and ultrasound scans found nodules on his thyroid.

"They had me contact my doctor in the next hour, have a CT scan and a biopsy. That afternoon was pretty hectic seeing specialists, so I had a feeling that it was probably going down the line that I didn’t want it to," he said in a Cycling Australia press release.

"You never want to hear that you’ve got cancer. It’s got such an ominous connotation to it, and it’s pretty heavy. But I anticipated this throughout the process. I was preparing myself for the worst-case scenario. I figured there's nothing I can do about it; at this point worrying about it wasn’t going to make it better.

The two-time world champion is currently recovering from surgery to remove the growth, but he is still focussed on next year's big goal in Japan. Glaetzer, who also has three Commonwealth Games golds to his name, finished fourth in both the individual and team sprint at the 2016 Olympics in Rio de Janeiro.

"[Looking to Tokyo] helps me to deal with it if I downplay it. Obviously I know it’s very serious, but at the same time, it’s very treatable. So it is now about what’s the plan from here, how can I minimise its impact on myself as an athlete."

Thankfully, Glaetzer's cancer is treatable, with Cycling Australia noting that he has a favourable prognosis due to catching the cancer early.

"I am thankful for the type of cancer that I do have and that it is treatable," Glaetzer added. "I am grateful for the fact that my medical team caught it when they did, that they went through the steps, that they were very diligent in checking my sore neck that has then led to catching this."

Glaetzer didn't take part in the first two rounds of the UCI Track World Cup in Minsk and Glasgow, and will also miss the third round in Hong Kong. He is, however, planning to attend rounds four and five of the series in Cambridge, New Zealand and Melbourne, Australia next month.

"I’m planning to go to the Cambridge and Brisbane World Cups to continue my preparation for the Tokyo Olympic Games. Then after the World Cups is when the next part of my treatment happens, and that might knock me around for a bit.

"But we have a rest week after the Brisbane World Cup anyway, so it fits in relatively well to our preparation and the impact shouldn’t be too severe if all goes well."