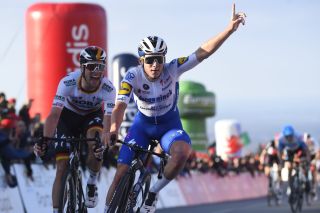 It remains unclear when or indeed whether it will take place, but the Giro d’Italia remains a target for Remco Evenepoel, despite the uncertainty shrouding the cycling calendar due to the coronavirus pandemic.

The 2020 Giro had been due to get underway in Budapest on May 9, but RCS Sport announced the postponement of the race last week, saying that a new date would not be decided upon until Italy’s ongoing period of lockdown comes to an end.

Following a teleconference with race organisers on Tuesday, UCI president David Lappartient said that a redesigned Giro could be shifted to Autumn, while a report from Cyclingopinions.nl suggested a possible May 29 start for a postponed Giro. Later on Tuesday, the UCI stated that “no decision has been made regarding the reallocation of dates and the format” of races postponed due to the Covid-19 pandemic.

Evenepoel was due to make his Grand Tour debut at the Giro before turning his attention towards the Tokyo 2020 Olympics, but the calendar now looks set to be utterly redrawn. In a Facebook conversation with Sporza, the 20-year-old said that, for now at least, he was continuing to train as though the Giro would take place before the Olympics.

“We have to wait and see, but I’m trying to prepare as well as possible,” Evenepoel said.

UCI denies Giro d'Italia will be rescheduled for late May

Asked about the unsubstantiated prospect of a Giro in June rather than May, the Deceuninck-QuickStep rider said: “The period between the end of the Giro and the Olympics will be shorter. We haven’t spoken with the team about it yet, but I think we will stick to the plan and then we will see how it is with the recovery period before Tokyo.

“The Giro was/is a goal for me, and I will work hard for it. When the new date is final, we will adjust our plans for it. Then we'll see where we end up."

While professional riders in Italy and Spain have been discouraged or prohibited from training on the road, riders in Belgium are still able to train outdoors for the time being. "I have trained intensively in recent days, today three hours was enough,” said Evenepoel, who added that he was not struggling with his motivation despite a hiatus of unknown length from racing.

“I already have five wins on my counter this season. Other riders haven’t won anything yet or are out of contract, and the situation is different for them, of course. I just like to cycle, that's my motivation.”

Evenepoel began his season with stage victory and the general classification at the Vuelta a San Juan and he continued with two stage wins and the overall at the Volta ao Algarve.