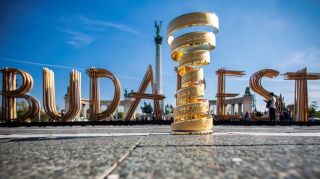 The 2020 Giro d'Italia was set to start in Budapest (Image credit: RCS Sport)

The UCI refuted reports that the 2020 Giro d'Italia could be rescheduled to start in late May.

Dutch journalist Raymond Kerckhoffs wrote in an opinion piece that he had "confirmed RCS is already working very carefully with the local authorities in Italy on a plan to start the Giro d'Italia on Friday 29 May" and that the three-week race would take place entirely within Italy, moving the 'Grande Partenza' in Budapest to 2021.

The idea, Kerckhoffs wrote, was to give Italy incentive to "resume normal life" after being locked down due to Covid-19 coronavirus.

The UCI said it wished to "clarify its position after the comments attributed to its President David Lappartient and inaccurately reported by certain media, concerning the date and duration of the 2020 Giro d'Italia linked to the impact of the coronavirus on the cycling season."

Earlier on Wednesday, the UCI president Lappartient told France TV Sport, "We're working with the organiser RCS to find a place for the Giro, undoubtedly in Autumn."

Lappartient said the UCI might relax rules to allow more WorldTour events to overlap and the road calendar would be extended to November 1 after a stakeholders meeting between the UCI, race organisers (AIOCC), teams (AIGCP) and riders (CPA) representatives.

But the UCI emphasised in a press release that the Grand Tours will not bump existing events from their allotted dates.

"In line with the principles adopted by the entire cycling family, the Grand Tours will have priority - after events already existing on the calendar at the date of resumption - in the revision of the calendar. At this stage, no decision has been made regarding the reallocation of dates and the format of the events concerned.

"This point will be the object, in time, of new discussions between the UCI and stakeholders, in a spirit of cooperation and solidarity between all involved. No further comment will be made at this stage."