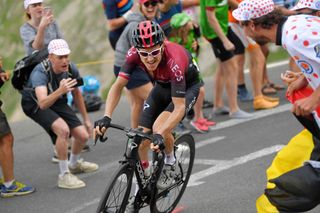 Geraint Thomas (Team Ineos) has revealed that he is aiming to target the Tour de France in 2020, according to a report in the Guardian. The 2018 Tour de France winner said that while his race schedule is not yet confirmed, he hopes to be at the French Grand Tour set to start on June 27 in Nice.

"I'm looking at targeting the Tour," Thomas told the Guardian. "We need to confirm it all, to chat it through, but at the moment it's all about the Tour again."

Team Ineos have lined up at the Tour de France with multiple leaders in the recent years. Thomas won the 2018 edition of the Tour de France while previous four-time winner Chris Froome placed third. This year, the team's rising talent Egan Bernal won his first Tour de France title while Thomas, who had wanted to defend his title, finished second.

Geraint Thomas: Just because you can ride a bike fast doesn't mean you're better than the next guy

Thomas told the Guardian that he was frustrated by the emergence of Bernal this year, particularly after he had spent so many previous seasons as a support rider for Froome at the Tour de France.

"Yes, to be honest," Thomas said. "When there are better riders [in the team] it's obvious. [Teamwork] is what you've got to do. It's a team sport and those two guys are special.

"Froome is the greatest Grand Tour rider of his generation, and Bernal … to win a Tour at 22, he could have 10 or 12 years of being super-competitive. But at least I will always have that Tour win."

Thomas said that he felt confident in his lead up to the Tour de France this year and so was disappointed not to win a second consecutive title. He said that the shortened stage 19, due to hail and ice in Tignes, left him feeling like there was an unknown about the outcome of the race.

Despite the unknowns of the 2019 Tour de France, Thomas said that he was proud of his second place behind Bernal.

"With second in the Tour [in 2019] I can be happy and proud, but at the time it was disappointing," Thomas said. "From the start, the way the season went, and the off-season. The buildup was nothing like 2018, but I was still confident."

"It was a shame about the cancelled stage [in the Alps] and the shortened day. It leaves an unknown. You can't say Egan shouldn't have won, but there is a bit of an unknown."

If Team Ineos give Thomas the green light to compete in the 2020 Tour de France, he could end up alongside defending champion Bernal and Froome, who will be racing for a fifth title. Froome did not compete in the Tour de France this year after sustaining serious injuries following a horrific crash at the Critérium du Dauphiné.

There could be opportunities for Thomas to race as a sole team leader of Team Ineos at the Giro d'Italia or the Vuelta a España, but he said he's not likely to race in either Italian or Spanish Grand Tour next year.

"You have to weigh up your position in the team and it's about what motivates you," Thomas said. "There is no point going to the Giro just to be the leader and only being 95% motivated. You need to be all-in. I'd love to do the Giro [to win] one year, but next year what excites me is the Tour again."