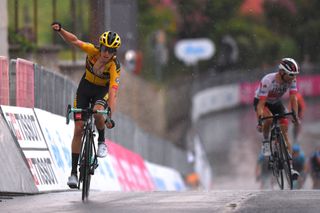 The new summer date for Il Lombardia, just two weeks before the start of the Tour de France, has given George Bennett a chance to target his favourite Classic of the season and proposed an especially fascinating battle with Remco Evenepoel.

Bennett still has the modesty of a hard-working mountain domestique but his victory at Gran Piemonte on Wednesday and Jumbo-Visma's renewed strengths as a team suggest the Kiwi is likely to be one of the few riders who can go with or even drop Evenepoel on the key Civiglio climb during the finale of Saturday's race.

"He seems to be living up to his reputation so far: Il Lombardia will be a cool battle with Evenepoel. I'm looking forward to it. We’ll both try to win and one of us will come out on top," Bennett told Cyclingnews on Friday after a final recon ride in the Lombardia hills.

"I know it's a super opportunity for me. With a team like ours, stacked with talent, you've got to take your chances when you can, so I'm going all in for Il Lombardia. I'm optimistic. Of course there's a lot of good guys racing too but there's no reason why we can't be at the sharp end."

Bennett has too much respect for his fellow riders to think Il Lombardia will be a simple battle between him and Evenepoel. He has raced the Italian monument five times, so he knows it become a battle of attrition on the long climbs and testing descents.

"There's a lot good guys here who will be up there. I think Ulissi is one of the main guys, Jakob Fuglsang looked really good at Strade Bianche, there's also [Vincenzo] Nibali and [Last year's winner Bauke] Mollema, plus others," Bennett suggested.

"I'm optimistic but it’s a whole different story when you get to the bottom of the Civiglio climb after 200km of racing, when you're absolutely panned and it's been 35°C all day."

Bennett showed his winning credentials at Gran Piemonte. He attacked on the final climb, dropped his rivals and then climbed to victory in the rain. Ulissi came close to catching him with a late surge but Bennett dug deep to find the speed to reach the finish line.

Il Lombardia could be similar, with whoever is the strongest over the Civiglio climb, 17km from the finish, going on to fight for victory.

"It's different to Gran Piemonte and in theory it's harder and so I like it even more," Bennett enthused after completing two recon rides this week.

"Lombardia is my favourite race of the year. I usually come and spend a week here with my girlfriend near Lake Como as my last throw of the dice for the season and so I've usually burnt all my matches during the season. It's nice to be close to peaking and to have done some altitude before it, too."

Most of the Jumbo-Visma Tour de France squad, including team leader Primoz Roglic, Tom Dumoulin and Steven Kruijswijk are riding the Criterium du Dauphine. But after return to racing at the Vuelta a Burgos and then the Tour de L'Ain, Bennett felt the two Italian classics were a better race option for him, while also giving him a rare opportunity to target victories.

"When I was switched from the Giro to the Tour team, I was supposed to do just Burgos and L'Ain, then train at home. But I floated the idea of having some personal goals in Italy this week and the team agreed and trusted me," he explained.

"It would have been a risk for me to do the Dauphine because that race can put you on your knees. I've done a lot of work before this so while I've missed the work volume by doing just two one-day races in seven days, I'm happy I came to Italy. It can actually help you recover and stay fresh.

"I'll be happy whatever happens at Il Lombardia. I'll go home to Andorra on Sunday and then do a week of long rides up high before the Tour de France. The goal is to bring the top-end down a little then build it again. I might pay for that in the first week of the Tour but my goal, my key days for the team, are in the mountains in the second and third week. That's the plan and if I can pick up a result along the way at Il Lombardia, it'll be perfect."