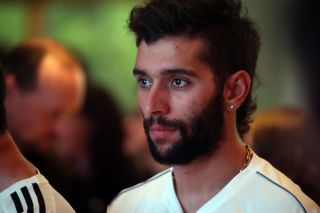 Nearly four months after a deeply troubling run-in with COVID-19, Fernando Gaviria (UAE Team Emirates) says he's back and in good shape and ready to race at the Vuelta a Burgos.

Together with Mark Cavendish (Bahrain-Merida), Arnaud Démare (Groupama-FDJ) and Sam Bennett (Deceuninck-QuickStep), Gaviria is expected to be one of the top names in the bunch sprints at Burgos, with one possible battle between the fastmen featuring on stage 2 and another on stage 4.

"I'm doing well," Gaviria told a small group of journalists the weekend before the race, which starts Tuesday. "The last few months have not been easy because training without knowing what races you'd have was difficult and a little demotivating.

"But fortunately my training has gone well and I've got through this period in in good shape."

Gaviria returns to Colombia after six weeks in UAE quarantine

That is perhaps easier said that done, given Gaviria himself contracted the COVID-19 virus at the UAE Tour, and had to go into a prolongued period of quarantine. After receiving the initial all-clear on March 26, he flew home to Colombia on April 8 with 55 other compatriots on a humanitarian flight alongside tons of medical supplies being brought to the South American country courtesy of the UAE to help with their COVID-19 effort.

While the battle against coronavirus is far from over and Gaviria is uncertain if the virus has left him with any long-term effects, he is fairly sure that's not the case.

"It'd be wrong to rule everything out, but so far I've felt normal on the bike and that's a relief," he said. "I had no idea how I might feel under these circumstances when I started training. But I'm taking things calmly now and I just hope things will work out well because I was definitely needing to start racing again."

Gaviria recognises he was lucky, in any case, because although he had to go to hospital in the UAE as a result of fever, the effects of the Coronavirus he contracted were relatively minimal.

"The fever went after two days and after that I didn't feel anything in particular: no coughing fits, no sore lungs, nothing. I had to wait a very long while to get a negative result to appear on the tests, but with hindsight the important thing was I felt normal during that process. As the team are from there, too, I could count on their support in their home country, which was a great help. They were there for everything."

After returning to Colombia, Gaviria then faced an additional period of isolation in a friend's house in Bogota in order to be 100 per cent certain he would not put his family at risk.

"That was the least I could to for them," he reflects. "That was hard again, but by then, I was in the final part of the process."

On an emotional level, Gaviria recognises that having had COVID-19 and seeing how his sport ground to a halt, putting on a race number on Tuesday morning in Burgos will feel, individually, massively significant.

"There was a long period when cycling really was not so important, because we all know that coronavirus has affected a huge number of victims and that's hugely regrettable."

"But on a personal level, for me, now,  I think being able to put on a race number is extremely satisfying. I feel the same adrenaline rush as when I first turned pro. We don't know what kind of conditions we'll be in or what the racing will be like. But what we know is we all need to be back racing."

In Gaviria's case, he will be follow up his showing in Burgos with repeat rides in Milano-San Remo and the Giro d'Italia, the latter an event where he has mixed memories.

In 2019, he won a first week Giro stage in somewhat strained circumstances  after fellow sprinter Elia Viviani was relegated, but then had to abandon with a knee injury, but in 2017 the Giro was where he made his Grand Tour breakthrough in style with no fewer than four stage triumphs.

While determined to go for the wins in Burgos, Gaviria says it's only reasonable to expect surprises; nobody is 100 percent sure of their form or what kind of results they may be able to acheive, particularly when races like San Remo are set to be run off at a very different time of year and in potentially very different race conditions, too. "Everything can change," he warned.

But as a rider, in any case, and no matter the results, Gaviria says that he feels that the time has come to give the public a chance to disconnect from their everyday lives, albeit briefly.

"Cycling has never stopped being cycling, and the least we can do is show that we're lucky to be bike racers  and if only for a while, try to help people to stop talking and thinking about the virus, and start talking about sport again," he said.

"That way people can forget about these harsh times even it's just for a few hours."