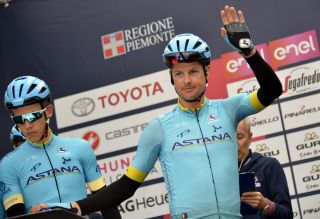 Jakob Fuglsang has opened up about how close he came to leaving Astana and completing a surprise move to Movistar for 2020.

The Dane has spent seven seasons at the Kazakhstani squad and a transfer to Eusebio Unzué's team would have ranked as one of the surprise moves of the off-season, though he renewed with his current team for two seasons back in August.

The 34-year-old enjoyed his best season yet in 2019, racking up victories at Liège-Bastogne-Liège, the Critérium du Dauphiné, the Vuelta a Andalucía and stages at the Vuelta a España and Tirreno-Adriatico. He also scored podiums at Strade Bianche, Tirreno Adriatico, Amstel Gold Race and La Flèche Wallonne.

Speaking to Spanish newspaper Marca, Fuglsang said that he had been in contact with Movistar, but that his current team offered him more options to compete in the future.

Fuglsang opts to stay with Astana

Fuglsang lands victory at Liège-Bastogne-Liège a decade after debut

"It's true that there was contact with Movistar and Unzué for a possible signing," said Fuglsang. "It was an interesting option, but I have finally renewed for two years with Astana and I'm very happy.

"Movistar was a great option for me, but I think I will have more options here. I'm already 34 years old, and I had to choose well because I'm not that young. I will be able to lead the team in several important races. I hope to be up to the task."

Fuglsang is expected to once again lead the team during the Classics and for a Grand Tour in 2020. This season, he was among the pre-Tour de France favourites after his outstanding spring campaign, and lay ninth overall after 15 stages before crashing out in Nîmes.

Next year might be different, however, with his Grand Tour ambitions not yet clear due to the close proximity of the Tour and the 2020 Olympic Games in Tokyo, one of Fuglsang's main goals.

"I love the course in Japan," he said. "It's really tough. It's definitely going to be one of my goals for the season. If it rains like it did during our reconnaissance, the race will be even harder. We have a lot of options to get a medal with Denmark.

"Unlike Yorkshire, this course suits us climbers better. The Olympics are held just six days after the end of the Tour and that makes it even more interesting."

Fuglsang even went as far as to say that he couldn't choose between a Grand Tour victory, achieved over three weeks, or one-day success at the Olympics, which comes around every four years.

"If you give me a choice between a gold in the Olympics, or a Grand Tour I would have doubts. Gold in the Olympics is something transcendent. It's also true that the Tour de France is the biggest thing," he said.

"I wouldn't know what to answer; it's a good question and I'd have to think about it more. In any case, for me to win gold would be the best of 2020."