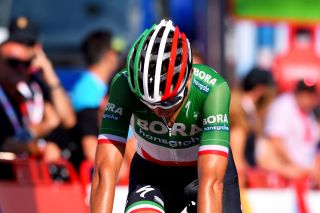 Davide Formolo abandoned the Vuelta a España due to injuries sustained in the mass crash on stage 6. The Italian managed to finish the stage but the decision was made on Friday morning not to start stage 7.

The Italian champion was one of a number of riders who went down in the crash that occurred 90km from the finish of Thursday's stage. His Bora-Hansgrohe team explained he'd suffered a blow to the pelvis.

Despite remounting, Formolo was visibly in discomfort for the remainder of the stage. He spent a lot of time back with his team car and while he rejoined the peloton for the final climbs, he eventually finished 13 minutes down on the main GC group.

"Davide was able to finish yesterday's stage after the crash, but was suffering from pain in the right side of his pelvis and this did not improve overnight," read a statement from the team.

Formolo had started the day 12th overall, with his teammate Rafał Majka eighth. The 26-year-old was in decent form coming into the race, finishing seventh at the Tour de Pologne after taking the Italian road race title.

Despite the loss of Formolo, Bora-Hansgrohe bounced back on Friday's stage 7, with Majka moving up to fifth overall after finishing fifth on the wickedly steep Alto Mas de la Costa climb.