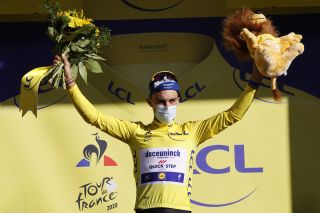 Julian Alaphilippe (Deceuninck-QuickStep) kept the leader’s yellow jersey on the first mountain finish of the Tour de France in Orcières-Merlette but his failure to win the surge to the line, and the fact that he missed out on the time bonuses, highlighted that he is not on the same form as 2019 and does not have the strength and determination to fight for the overall victory.

The French cycling fans and the partisan French media would love for it to be otherwise but Alaphilippe seems to know he lacks the dynamite he had in his legs and heart last year.

“We had the double objective to win the stage and defend the yellow jersey. We kept yellow but didn't win because I was beaten by stronger riders,” he accepted sportingly.

Tour de France 2020: How the GC contenders fared on the first summit finish

“Obviously I’d love to have been able to win and I tried to do it, but the tempo was very, very high on the final ascent. I was on the limit, so there’s no disappointment.”

Alaphilippe showed a flash of brilliance by attacking and winning stage 2 in Nice but today the overall contenders and especially Primož Roglič (Jumbo-Visma) came out to play, showing the new world order amongst in the peloton.

Roglič was untouchable when he sprinted to the finish line ahead of fellow Slovenian Tadej Pogačar (UAE Team Emirates). Guillaume Martin (Cofidis) and Nairo Quintana (Akea-Samsic) were strong and vigilant enough to finish third and fourth.

Alaphilippe eased up when he realised he would not win and the lactic acid burnt deep into his legs, which meant he missed out on the four-second time bonus for third place.

He is still in yellow but now Adam Yates (Mitchelton-Scott) remains just four seconds behind and Roglič moved up third at seven seconds. Pogačar’s six-second time bonus lifted him to fourth overall at just 11 seconds.

“As I’ve said, the objective is not to win the Tour de France but to chase stage victories. I’m very proud to be in the yellow jersey but our plan won’t change,” Alaphilippe insisted, aware that the Deceuninck-QuickStep team with him in France cannot support him high into the mountains.

“It was a very hard stage. I’m very proud of my team and I have to thank them, they worked great today and controlled the race until the foot of the final climb. But I don’t want to ruin the team either, we’re not here to control the race for three weeks. We’re just happy to be in yellow again tomorrow,” he said.

Last year, Alaphilippe was in a pressure cooker of expectation. This year he seems to be enjoying and savouring it all so much more. He had not won a race since last year’s Tour de France until Sunday but even that monkey was thrown off his bike in Nice.

“I was missing a win but I got one and to take yellow too was great. But as I keep saying, we’re taking things day by day. I’m hugely proud to wear the yellow jersey but it’s not the end of the world if I lose it.”

Some believe Alaphilippe is bluffing but the finish in Orcières-Merlette showed otherwise. Alaphilippe could one day win a Grand Tour, with the support of a strong team and a route that suits him. This year, he has neither and so he and his Deceuninck-QuickStep team are pragmatic and honest.

“Julian likes to win races, GC riders don’t do that, they take a completely different approach to racing. His character is to spend energy everyday so it’s not easy to keep him calm.

“I don’t say it's impossible to win a Grand Tour but for sure we won’t ride to win this Tour.”