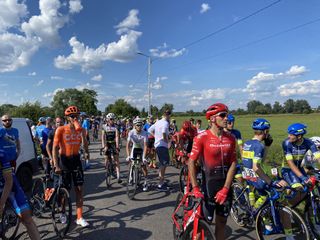 The first international UCI-certified race to take place since Paris-Nice in March was halted on its very first day – not by a coronavirus case but by a vehicle that entered the circuit and crashed.

The Dookola Mazowsza, a four-stage race in Poland that carries a 2.2 UCI classification, got underway in Teresin on Wednesday but was abruptly brought to a halt towards the end of the flat opening stage.

According to reports, a motorbike drove onto the finishing circuit and crashed with a race organisation car, and the riders were ordered to stop with just under 30km to go.

"The race seems to be over. Civilian motor bike was on the circuit and crashed. No riders were involved, but the race has been cancelled," read a message on Twitter from the Israel Cycling Academy team account.

The cancellation of the entire stage was soon confirmed by race officials, with riders making their way back to team bases and all awarded the same times.

"Race over. The accident happened on an intersection with the circuit and due to police investigations we won’t be able to continue," read another message from the Israel team account.

According to Polish news organisation Polsat, the motorbike driver was overtaking parked vehicles on the opposite side of the road and crashed into the car from the race organisation that was blocking off the road for the riders.

The motorbike driver was reportedly seriously injured and was taken to hospital by helicopter.

The Dookola Mazowsza was the first international UCI race to take place since the coronavirus pandemic enforced the shut-down of the racing calendar back in March. Recently, a number of national championship events have taken place, but this was to be the first international competition. Certain races, such as the HTV Cup in Vietnam, and the GP Vermarc in Belgium, have gone ahead, but they have been non-UCI-official events.

Israel Cycling Academy were one of 25 teams on the start line, along with the CCC Development Team.

The Dookola Mazowsza will continue – or re-start – with a short individual time trial in Sluzewiek on Thursday.

Polsat reports that a police investigation into the incident is underway and the holding of the final two stages, which are traditional road stages, is in doubt.

The race seems to be over. Civilian motor bike was on the circuit and crashed. No riders were involved, but the race has been cancelled.#DookolaMazowsza pic.twitter.com/69qVqlP1flJuly 15, 2020