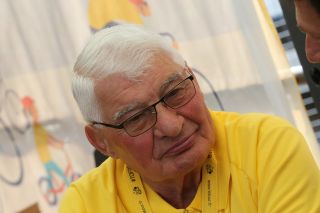 Family, friends, former greats of French cycling and hundred of local people paid their last tributes to Raymond Poulidor at his funeral in Saint-Léonard-de-Noblat on Tuesday

Poulidor died last Wednesday at the age of 83, sparking a wave of memories amongst a generation of cycling fans and respect from everyone else. Poulidor famously never managed to win the Tour de France but that only endeared him to the French public in the sixties and seventies.

He was affectionately known as 'Poupou' and was still widely recognized and greeted with affection at the Tour de France, where he worked for yellow jersey sponsor Credit Lyonnais.

Poulidor in his own words: L'Equipe publishes moving interview with the Tour legend

A recent photo of Poulidor riding his bike on his local roads hung across the entrance to the church, with two large images of Poulidor racing with his two historical competitors Jacques Anquetil and Eddy Merckx inside the church.

A multitude of colourful wreaths were placed at the foot of the altar, while several Mercier jerseys were held up by the public outside the church.

"We will miss him. Raymond leaves a big void," Thévenet said before the funeral service. "Even people who had never seen Raymond race knew him in some way. It's a shame that Raymond will not be able to see all the success of his grandson Mathieu van der Poel."

Tour de France director Christian Prudhomme was also in attendance and suggested that Poulidor embodied "the France of always."

Corinne van der Poel spoke briefly about her father during the funeral, reading a message from Mathieu.

"I have a number of favorite races in cyclo-cross, but there are also 'crosses that I don't like to ride. But thanks to your messages and encouragements every Sunday, I felt like doing my best everywhere again. That's why, Grandpa, you are my champion," Corinne said.

Legendary race announcer Daniel Mangeas read a moving euology, recalling: "He always said to me: 'As soon as I'm in the cycling world, I'm happy, I'll never be able to give back to cycling all that it has given me.'"