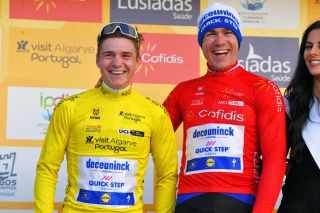 Remco Evenepoel and Fabio Jakobsen have exchanged a string of messages of support as the Deceuninck-QuickStep pair recover from major injuries.

Evenepoel broke his pelvis when he crashed over a bridge at Il Lombardia last weekend, not long after Jakobsen had suffered life-threatening injuries in a crash at the Tour de Pologne.

Evenepoel is still in hospital in Herentals in Belgium, although he took his first few tentatives steps with crutches on Friday. Jakobsen, meanwhile, is back at home after spending a week in intensive care in Poland and another week in hospital in his native Netherlands.

Fabio Jakobsen: The doctors at the finish line saved my life

On Saturday, Evenepoel shared, via social media, a screenshot of an exchange of text messages with Jakobsen.

Evenepoel added: "Hey friend, it's tough, but remember what I told you, you taught me something I didn't have in me! So that sticks in my head. The fact that both you and I are still alive means that cycling is not finished with us."

Evenepoel memorably raised Jakobsen's race number above his head as he soloed to a sensational stage victory in Poland. Jakobsen had crashed into the barriers on the opening day after Dylan Groenewegen deviated from his sprinting line, and was placed into a coma as doctors fought to save his life.

He has since returned home and faces a long road to recovery via numerous facial surgeries, and his prospects of returning to race as a professional cyclist remain unclear.

"I want to let everyone know that I am very grateful that I am still alive. All the messages and words of support have given me tremendous strength. Step by step I can slowly look to the future, and I will fight to recover," Jakobsen said recently.

Evenepoel, meanwhile, is expected to return to the peloton, but not before 2021.

"Me and the team are thinking positive and looking forward to next season," he said on Monday. "We'll take it really slow, really calm and do everything to become a better rider and become stronger than ever before."