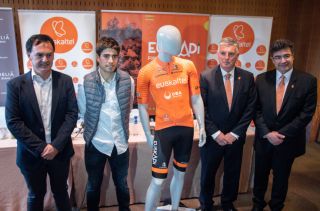 The name of Euskaltel will return to the peloton in 2020, as ProTeam Fundación-Orbea have announced that the Basque telecommunications company has agreed to join the team as a main sponsor for four years.

Itzulia Basque Country, the team's home race which runs from April 6-11, will be the team's debut under the new sponsorship. From that point onwards, the team will be known as Euskaltel-Euskadi, as the long-running top-level team was known until its dissolution in 2013.

Mikel Landa, Bahrain McLaren rider and President of Fundación Euskadi, said that the aim is to return the former WorldTour organisation's feeder squad, now an independent ProTeam in 2020, back to the top of the sport.

Landa takes over as president of Euskadi Cycling Foundation

Euskaltel-Euskadi: an idea as much as a team

"The goal is to continue on the path of growth, and the support of Euskaltel is going to be a huge boost," he said. "We want to put the team back where it needs to be. The collaboration with Euskaltel, as well as the move to the UCI ProTeam category, is a move in that direction."

Euskaltel was previously a sponsor at top level Basque squad, Euskaltel-Euskadi between 1998 and 2013, showcasing the best of Basque cycling including Iban Mayo, Roberto Laiseka, Igor Antón, Haimar Zubeldia, and Samuel Sánchez. In its later years, Landa, Mikel Nieve, Ion Izagirre and brother Gorka Izagirre were key riders at the team.

"The relationship of Euskaltel with cycling and Fundación Euskadi has been a success story," said Xabier Iturbe, President of Euskaltel. "We want to repeat the great union and bring back the excitement that it generated in all the fans. We share this feeling and values.

"This team is something unique; it represents an entire country, and we want to be part of it once again. We have a lot of confidence in the new project led by Mikel Landa because he's doing a great job."

Despite drawing its entire squad from a relatively small geographic area in the north of Spain and south-western France, Euskaltel-Euskadi achieved numerous grand successes during its time in the peloton.

Three Tour de France stage victories were among the 18 Grand Tour stage wins on Euskaltel-Euskadi's final palmarès, while Egoi Martínez and Sánchez won the polka dot jersey at the race. Overall victories at the 2004 and 2005 editions of the Dauphiné Libéré, courtesy of Mayo and Iñigo Landaluze, plus Sánchez's win at the 2012 edition Itzulia, were among other major victories.

Last year, Fundación-Euskadi introduced Sergio Higuita to the European peloton, with the young Colombian moving to EF Pro Cycling later in the spring. For 2020, the team absorbed five riders from the defunct Euskadi-Murias team, including 2019 Vuelta a España stage winner Mikel Iturria.

Veteran sprinter Juan José Lobato and 2013 Tour de l'Avenir winner Rubén Fernández also signed up to the squad, which hopes to receive its first wildcard invitation to the Vuelta this season.