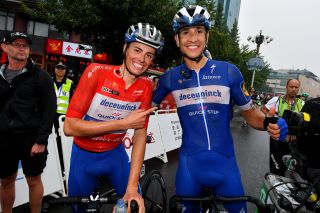 Enric Mas (left) celebrates victory in the Tour of Guangxi, his final race with Deceuninck-QuickStep before moving to Movistar (Image credit: Bettini Photo)

The 2020 season will mark the start of a new era for Movistar, with the Grand Tour contender trio of Nairo Quintana, Richard Carapaz and Mikel Landa leaving, replaced by a group of largely young riders, including 24-year-old GC rider Enric Mas.

Mas will make up part of a new Grand Tour triumvirate next season, alongside veteran Alejandro Valverde and fellow promise Marc Soler. Mas ended his Deceuninck-QuickStep spell on a high with overall victory at the Tour of Guangxi, his first WorldTour stage race win, and he's looking forward to riding in a different shade of blue next year.

In an interview with Spanish newspaper Marca at his first Movistar get-together, Mas compared the move to a homecoming, saying that, as a Spanish rider transferring to a Spanish team, the shared language is one of multiple reasons for doing so.

"Being at Movistar is like being at home," he said. "I hope to spend a lot of years here. Living in Andorra with my teammates – there are around 10 of us – you already know what the team is like from the stories they tell you. It's what I expected.

"When I turned pro, [Valverde] always helped me, and now we're going to share a team together. I can't ask for anything more from life. But it's not only with him – being able to speak your language, express yourself with people as you have done all your life is different.

"Speaking English is not the same. You always had to be translating with colleagues, but now the jokes will hit the first time," he added, echoing comments made to Cyclingnews in China.

Victory in Guangxi, achieved off the back of a stage victory on the steep hilltop finish at Nongla Scenic Spot, was the highpoint of a disappointing season for Mas. His main goal, a debut at the Tour de France, ended with 22nd place, a comedown after finishing second at the Vuelta a España the previous season.

"Having gone through moments of suffering in the Tour de France will do me good in the future. It's better for it to happen now than in a few years," he said.

Aside from that, he has enjoyed good times at Deceuninck-QuickStep. Still, in China there was a sense that Mas wanted to get the season over with and look to the future, something he confirmed when speaking to Marca.

"This year saw bad luck. I hadn't won a single race but I did it in the last race of the year," said Mas. "It had a different feel, as it was the last time I wore the QuickStep jersey after three years – or four if you count when I was in the Continental team [Klein Constantia]. I wanted to go in the best way, and I think I did that.

"After the race in China, we all went home. We were a little tired of the trip, the race, everything. I said goodbye to the staff and my colleagues. It has been a good time, but right now we are concentrated on next year, and I'm only thinking about 2020."

One close link Mas forged while at the team, largely made up of non-Spanish speakers, was with Philippe Gilbert, he said. After riding for Alberto Contador's U23 Fundacion Contador team, and then taking advice from Valverde, it seems like Mas has been blessed with his mentors over the years.

"I think everyone left a similar mark on me, but with Philippe maybe it was something more. Every day that I was with him I learned something new. It was a masterclass.

"If you see how many years he's been [at the top] and he's still winning, it's something spectacular. Getting a three-year contract at 36, as he has, is very difficult. He's a professional from head to toe, a unique companion and a great person."

After leaving Gilbert, and QuickStep behind for Movistar, Mas enters a very different environment. At Grand Tours, he moves from a rider perceived as 'on his own' to one with a team built around him as a co-leader. The pressure, and responsibility, will increase, but Mas won't shy away from that, he says.

"I'm not afraid of the responsibility. I've always said that I want to face great challenges, and here I'll be able to take them on. We haven't talked about the calendar yet; we'll talk about it at the team presentation, but it's clear that I'll have an attractive schedule.

"My main reason for changing teams is that I'll have great companions to help me in the mountains. I wanted to have a teammate who is just as strong as me so that I can compete with my rivals. There were many other reasons, but this was one of the main ones.

"I'm going to try to take over from the leaders [Quintana, Carapaz, Landa], and see what happens. What I can promise is that I'm going to give my all. Then what will happen will happen."