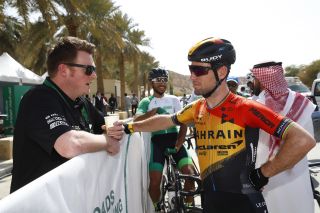 Uncertainty shrouds the world of professional cycling as races are postponed and riders are put under lockdown but teams will need to be ready to race again once the current coronavirus pandemic passes, according to Bahrain McLaren’s Rod Ellingworth.

The team took the decision last week to leave Paris-Nice before the French stage race was ended a day earlier than planned. Since then the squad has focused on ensuring that all of their riders and staff made it home to their respective families but the challenging facing the team – like all other squads in the same position – is navigating the uncertainly they now face and ensuring that their athletes are ready to go once racing eventually resumes.

Time scales on such a scenario are impossible to predict with racing off the table for several months at least. UEFA’s decision to postpone June’s European Championships only highlighted the level of uncertainly facing July’s Tour de France, while the Giro d’Italia and the Classics have already announced that they are seeking new dates for their events much later in the year.

"The first thing to look at is the health of all of our riders and staff. Let's look after them and their families and be supportive. That was the first thing we did. Then for the riders in particular, when they haven't got a short-term goal things are difficult for them to stay motivated," Ellingworth told Cyclingnews from his home in England.

"Some of them, like the Classics guys, will have been looking to take a break anyway after Paris Roubaix so it would make sense to me that they would remain on track with their training for the next few weeks, take a break and then get going again.

"It's a difficult one but you've got to be open-minded and logical. Racing will happen at some stage and you've got to be ready when it does. The main thing is about being honest with people.

"They don't know when the season is going to open up again. That makes it hard for them to try and really hurt themselves when it comes to riding. And as we've seen with some riders they're completely restricted to remaining indoors. We're doing a very detailed rider-by-rider case and we've got to look at how they can maintain condition. I can't see how many of them can push condition on, but this is where coaches have to get creative and really support the guys."

Some teams have already leaped into the world of online training, using platforms such as Zwift to keep spirits high and engagement level with fans at a decent level but away from the health and fitness of athletes, teams will also struggle with providing exposure and traction for their sponsors and partners.

That's less of a problem for a team like Bahrain McLaren, who are well-funded and have long-term security but Ellingworth recognizes that not all teams are equal and that several high profile squads were already on the lookout for 2021 investment well before the wheels stopped.

"I think that the whole cycling community will be concerned about that," he said.

"Some teams will be better off in that world than others but I'm sure that if there are people pitching to gain extra funding then this a hard time. But at the same time, everyone throughout the world knows that this isn't a normal situation.

"It's not that cycling isn't working but I think that everything will go on hold and then start again. We've got to press the pause button and go from there. I think that it's a concern with everyone. It's got to be a major concern."

In terms of putting a possible date on when competition may resume, it's an impossible task at this stage.

"All that you're doing is guessing and that's the difficult thing with this. Who knows? It's bigger than this because people's lives are on hold. We've got to go with the flow and stay flexible. We'll support our guys as best as we can but we've got to stay open-minded. We know that the Giro is off now, which is a big blow through May. It's a really difficult moment."