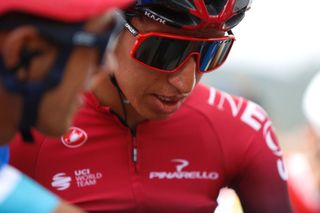 Reigning Tour de France champion Egan Bernal (Team Ineos) says that he believes that the Tokyo Olympic Games – scheduled to take place from July 24-August 9 – should be postponed, potentially even until next year, due to the current coronavirus crisis.

According to L'Equipe, Bernal made the comments on Sunday while taking part in a live Facebook training session organised by a Colombian supermarket, having returned home to Colombia while the sport takes an enforced break from competition.

"At the present time, given the global situation linked to the coronavirus, I think that the Olympic Games should not be organised on the dates that were planned," Bernal said, according to the French sports newspaper.

"Personally, I'm for a postponement of a few months, and to organise them next year," he said. "All we can do now is stay home to deal with the coronavirus, because this threat is far more important than the Tour de France or the Olympics."

The 23-year-old Colombian – who has so far raced eight days in this coronavirus-blighted 2020 season, including the time trial and road race at his national championships, followed by the Tour Colombia 2.1 stage race, where he finished fourth overall – had been targeting both a defence of his title at this summer's Tour de France and gold at the hilly Olympic road race in Japan, and while he didn't specifically mention the Tour, his comments imply that this year's race – which is set to come ahead of the Games, from June 27-July 19 – might also be rescheduled for a later time.

While Bernal had subsequently returned to Europe in readiness for the main part of his season, he's now back home in Colombia and observing government rules that require a 14-day period of self-isolation for anyone having arrived from abroad.

Two days ago, Bernal announced that he'd been tested for the coronavirus and returned a negative result, but that he'd nevertheless be training at home, pushing the Ministry of Sports' 'I train at home' initiative to help ensure that Colombians look after their health during the coronavirus pandemic.