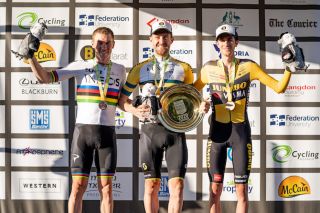 Luke Durbridge claimed the fourth Australian elite national title of his career on Wednesday and said that the presence of world time trial champion Rohan Dennis forced him to raise his game.

In a repeat of the result of the 2019 championship, Durbridge simply had too much for Dennis, who, like last year, started the race in new team colours, having switched from Bahrain-Merida to Team Ineos over the winter.

It looked as though the world time trial champion might claim back the title he last won in 2018 but, after holding a slender lead at the intermediate checkpoint, Durbridge came into his own in the second half of the 37km test, eventually finishing 18 seconds clear of Dennis.

"It was a really good day and I’m a proud man to be riding back to Europe wearing the Australian colours for another year," Durbridge said at the finish.

"It’s always a big benchmark when the world champion rocks up for the national titles and it makes me lift my level.

"I did it again and I am really, really happy. A lot of work goes into this in December; a lot of support from back home, family, my wife Lara, coach Ben and the team. We all put a lot of effort in to train hard in the off-season, but this is why you do it."

Durbridge will line up at next week’s Tour Down Under, where Mitchelton Scott will be aiming to win their third straight title. The team won the race in 2018 and 2019 through Daryl Impey.

The 28-year-old will then take aim at the Classics after his campaign last year was ruined by a crash that resulted in a broken collarbone. The Olympic Games in Tokyo, however, are central to Durbridge’s 2020 ambitions. With two spots going to Australia for the time trial, one would assume that Dennis and Durbridge would be the prime candidates.

"To win the national title is really special to me and I think that, going into the Olympics this year, it’s a really good indicator that maybe there are two spots up for grabs and that both Rohan and I can take them, which would be fantastic," he said.

The Australian national championships continue throughout the week with the elite road races taking place this coming weekend.