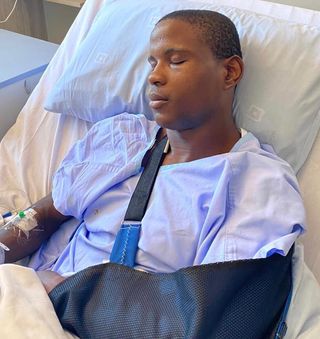 Nicholas Dlamini has spoken for the first time since surgery to correct the broken arm the 24-year-old NTT Pro Team rider suffered when he was manhandled by a park ranger in Cape Town, South Africa, saying in a message on Facebook that he was "overwhelmed by the support offered by everyone at home and around the world, especially from the world of cycling."

Dlamini was due to start the 2020 season at the Tour Down Under in Australia in January but will now need significant time to make a full recovery, affecting his 2020 plans and hopes of riding the Tokyo Olympics for South Africa.

"This has been an extremely upsetting experience and your support means a lot to me. My first step was to undergo surgery and I am told that this went well, but the surgeon is unable to make a prognosis at this early stage. So, for the moment, I am unable to say when I’ll be back on a bike. My surgeon and the care team will be liaising with the NTT team doctor to establish this," Dlamini wrote.

"For now, I need to receive expert care and physio at hospital or rest at home until I’m well enough to leave and make a statement to the police. I am not sure yet when this will be, but for now things are a little uncomfortable and I am still coming to terms with what happened."

Dlamini was training at the Silvermine section of the Table Mountain National Park near Cape Town on Friday December 27 when he was stopped at the side of the road and then forcibly seized by one of four SANParks rangers. Video footage of the incident circulated across social media causing outrage, as it shows one of the park rangers pushing Dlamini up against the side of a Table Mountain National Park van. The park ranger then twists Dlamini's left arm behind his back until the sound of a 'snap' is audible.

SANParks, the conservation authorities, released a statement that claimed Dlamini entered Table Mountain National Park at Gate 1 located at the Silvermine section without paying the Conservation fee or showing proof of activity permits when requested.

Donovan Le Cok, who took the video footage of the incident, has said that he wasn't riding with Dlamini at the time, but that he saw the rider training on Silvermine Road. In a post on Twitter, Le Cok said that as Dlamini descended to exit the park, a group of six officials tried to stop him by grabbing the bars of his bike.

"This caused him to crash and hurt himself," Le Cok said. "Nic got up and was confronted by a senior ranger (the large man in the video who eventually assaulted him.)"

Le Cok said that he decided to film the incident when he saw that the situation between the park rangers and Dlamini began to escalate.

"The large senior ranger laid into Nic, who is a skinny small guy," he said. "Then turned him around and twisted his arm until it snapped. It was audibly loud and Nic screamed. Nic kept shouting 'my arm is broken, my arm is broken!' The officials then proceeded to throw Nic into the back of the van.

Dlamini has received hundred of messages of support after the incident, including from South African officials and politicians. He is being assisted by his NTT Pro Cycling team and international law firm Norton Rose Fulbright is handling his case as SANParks carries out an investigation.

"For now, I need to receive expert care and physio at hospital or rest at home until I’m well enough to leave and make a statement to the police. I am not sure yet when this will be, but for now things are a little uncomfortable and I am still coming to terms with what happened," Dlamini explained. "I will be represented by the international law firm Norton Rose Fulbright following this terrible incident. Norton Rose Fulbright have enormous experience in dealing with contentious issues such as this and are currently dealing with Caster Semenya’s case against the IAAF. Our thanks for the many numerous offers for legal representation from concerned people willing to help me.

"Lastly, with the help from my fantastic support team, my manager and the guys at NTT, I will be taking legal advice on the next steps from Norton Rose Fulbright, and for this reason I hope you can understand why I cannot give any more detail to anyone at this stage. I look forward to giving you more detail as soon as I can."

"NTT Pro Cycling would like to be clear that we fully condemn violence in any form and are all highly distressed to see our teammate treated in this manner," the team wrote in a public statement," read a statement from the team.

"The 24-year-old had just completed a very promising 2019 which included his first Grand Tour, the Vuelta a Espana, and he was looking at following that up with further participation in some of the sport’s biggest races in 2020.

"This unnecessary injury will now have a serious effect on that, as well as his chances of racing at the 2020 Tokyo Olympic Games."

This is @nich_dlamini arm. That is the severity of the assault on him. pic.twitter.com/qBqABL9QBjDecember 27, 2019