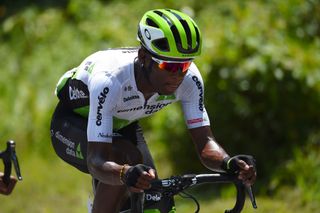 Nicholas Dlamini (NTT Pro Cycling) has sustained a broken arm after being involved in an incident with SANParks rangers while training on Friday in Cape Town. The South African rider has been taken to nearby hospital where X-rays showed a break to the lower end of his left humerus bone just above the elbow.

The video footage of the incident circulated across social media causing outrage, as it shows one of the park rangers pushing Dlamini up against the side of a Table Mountain National Park van. The park ranger then twists Dlamini's left arm behind his back until the sound of a 'snap' is audible.

The park ranger then roughly moved Dlamini, who appeared to be doubled over in pain, to the back of the van, open the rear trunk door, and put Dlamini into one of the rear seats.

"We are aware of a video in which one of our riders, Nic Dlamini, was involved in an incident in Cape Town earlier today," said a statement published on the NTT Pro Cycling official Twitter account.

"He's currently undergoing medical assessment after which we'll be able to provide a full update on what transpired."

SANParks, the conservation authorities, released a statement that claimed Dlamini entered Table Mountain National Park at Gate 1 located at the Silvermine section without paying the Conservation fee or showing proof of activity permits when requested.

"Table Mountain National Park rangers were informed about the incident and upon investigating and finding the cyclist who could not produce his entry ticket or a valid activity permit the situation spiraled causing the suspect to injure himself during the ordeal," read the statement.

SANParks has indicated that it will collect statements from the rangers who were at the scene, as well as collect a statement from Dlamini.

Donovan Le Cok, who took the video footage of the incident, has said that he wasn't riding with Dlamini at the time, but that he saw the rider training on Silvermine Road.

In a post on Twitter, Le Cok said that as Dlamini descended to exit the park, a group of six officials tried to stop him by grabbing the bars of his bike.

"This caused him to crash and hurt himself," Le Cok said. "Nic got up and was confronted by a senior ranger (the large man in the video who eventually assaulted him.)"

Le Cok said that he decided to film the incident when he saw that the situation between the park rangers and Dlamini began to escalate.

"The large senior ranger laid into Nic, who is a skinny small guy," he said. "Then turned him around and twisted his arm until it snapped. It was audibly loud and Nic screamed. Nic kept shouting 'my arm is broken, my arm is broken!' The officials then proceeded to throw Nic into the back of the van.

"I stopped filming as the officials then started getting aggressive towards me, they tried to grab my phone and my hand."

Dlamini turned professional in 2016 with Dimension Data's Continental team. He moved up to the WorldTour team in 2017 as a trainee where he remained through the following two seasons. He is also a member of the newly-named team NTT Pro Cycling in 2020.

As the video of the incident between the SANParks rangers and Dlamini circulated across social media channels, cyclists expressed their anger, including four-time Tour de France winner Chris Froome.

"Very sad to see this. Disgusting behaviour by officials. [Nic] is one of the nicest guys I know ... he doesn't deserve this treatment! Wishing you a speedy recovery Nic," she wrote in a post on her Twitter account.

This is @nich_dlamini arm. That is the severity of the assault on him. pic.twitter.com/qBqABL9QBjDecember 27, 2019