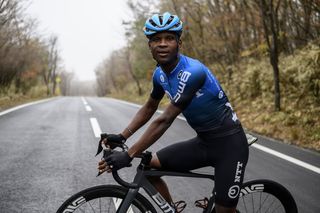 Nic Dlamini will get back to racing a week sooner than expected, riding on NTT Pro Cycling's squad at the Vuelta a Burgos after teammate Carlos Barbero suffered a broken hand in a crash during the team's training camp in Lucca last week. It will mark Dlamini's first race since the South African had his arm brutally broke by a park ranger near Cape Town.

Dlamini, 24, was training in December in the Silvermine section of the Table Mountain National Park near Cape Town when four SANParks rangers stopped him, claiming he had failed to pay a Conservation fee or show proof of activity permits when requested. One ranger grabbed him roughly and twisted his arm up behind his back, breaking his humerus bone in two.

The incident, captured on video, went viral and led Minister of Environment, Forestry & Fisheries Barbara Creecy to suspend the rangers and condemn the violence with which Dlamini was apprehended.

Dlamini recovered and ready to race as soon as he can

Dlamini: I am overwhelmed by the support offered by everyone

"I've haven't pinned on a number in about 10 months, if not more, and so I'm very excited and nervous," Dlamini said in a team press release. "I've done all the preparation and I'm feeling really good. I'm really looking forward to the race, to be on the start line and having a number on my back, that's going to be a lot of fun.

"We've got a strong line up and obviously getting a late call up to this race is really cool. Being able to start racing even earlier than originally planned is a good thing for me, as I can get my head into it much quicker and earlier. Burgos is a really nice race, it was actually my very first race as a stagiaire so it's nice to be heading back."

Dlamini told the Daily Maverick that his lawyers with Norton Rose Fulbright are still pursuing the case.

"There has been some progress with the legal case, but I can't really say much," Dlamini said. "My lawyers are working on it and there has been a lot of communication back and forth."

Dlamini said the team's camp has them ready to step up another level.

"The training camp was amazing and the entire team looked in terrific form, and was super motivated. We worked specifically on anaerobic capacity and I can confirm we are ready to step up to another level. The camp was really useful just before the season resumes because we hadn't been in personal contact although we had been in touch through the team platforms.

"At the camp, we were able to ride and suffer together and use each other's strengths to motivate us. It also gave me the chance to meet some of the new staff I will be working with because I missed a few camps earlier in the year because of the broken arm. It was also a chance to meet Bjarne Riis [the team's new general manager] and learn from him. He used his experience and taught us new tactics every day – even the senior guys in the team learned new things. The entire team is really hyped to get back into racing."