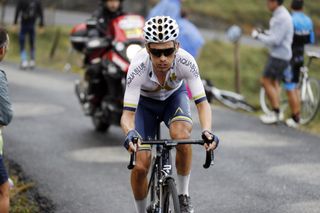 Austrian prosecutors announced on Monday that banned rider Stefan Denifl could face up to 10 years in prison if he is convicted of fraudulently obtaining funds from sponsors while doping.

In March, Denifl confessed to doping after the Operation Aderlass raid uncovered a reported 40 blood bags in a garage linked to doctor Mark Schmidt.

Both Denifl and Max Hauke, the Nordic skiier reportedly caught carrying out a blood transfusion during the police raid during the world championships in February, are facing fraud charges. Last week, Austrian prosecutors announced they had lodged similar charges against Georg Preidler.

The situation for Denifl is more serious, however, as the former Aqua Blue Sport and IAM Cycling rider is accused of blood doping and using human growth hormone from 2014 until the end of his career. Denifl signed a contract with the CCC Team for 2019 but backed out of the deal in December before the season got underway.

The prosecutors estimate that Denifl fraudulently obtained as much as €500,000 in sponsorship under false pretenses because of his doping activities.

In March, the UCI provisionally suspended Denifl, 32, after his confession. He accepted a four-year ban, putting him out of competition through 2023.

Denifl turned pro in 2006 with the Austrian Team Voralberg, and then raced with Elkhaus-Simplon until he joined the Cervelo Test Team in 2010. He moved on to Leopard Trek, his first WorldTour team in 2011 before moving across to Vacansoleil the next year. He then moved to IAM Cycling in 2013 and stayed with the team until it folded.

His major accomplishments, the overall win in the 2017 Tour of Austria, a stage win in the 2017 Vuelta a Espana and the mountains classification in the 2015 Tour de Suisse, were expunged after his doping admission, along with all results back to June 1, 2014.