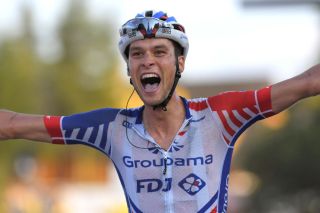 According to a report by the Austria Press Agency, Georg Preidler has been charged with fraud in relation to his testimony in the Operation Aderlass doping inquiry.

Preidler admitted to having his blood withdrawn by doctor Mark Schmidt, who is accused of providing blood transfusions to numerous athletes, but denied having it re-infused.

The APA reports that the Innsbruck Public Prosecutor's Office announced it had filed charges of "serious (sports) fraud" against the 29-year-old at the Regional Court of Innsbruck. However, Preidler still has two weeks to appeal the charges. Preidler could face between 6 months and 5 years jail time if found guilty.

Preidler is accused of "regularly practising blood doping and also taking growth hormones, starting with the Giro d'Italia in the spring of 2017 until his doping confession," prosecutor Thomas Willam announced, according to APA.

In 2017, Preidler helped Tom Dumoulin to win the Giro d'Italia as part of Team Sunweb before signing on with the Groupama-FDJ. In 2018, he worked for Thibaut Pinot in the Giro until Pinot succumbed to illness and dropped out before the final stage.

Preidler then raced the Tour de Pologne, where he won his first WorldTour stage and finished sixth overall, earning his selection for Austria's team for the world championships. He finished 36th in the time trial and dropped out of the road race.

In March after Operation Aderlass broke, the UCI provisionally suspended Preidler and fellow Austrian Stefan Denifl following their admissions of involvement in the blood doping scheme. Denifl accepted a four-year ban, ineligible until March 2023, while Preidler's ban is still provisional as he is contesting the case.

According to the Public Prosecutor's Office, because Preidler raced at the UCI Road World Championships in Innsbruck, he was contractually obligated to abide by anti-doping rules set by the UCI and those of the race organisers. Not doing so, they say, is criminal fraud and estimate the damages at 250,000 euros.

Operation Aderlass emerged in late February 2019 when five Nordic skiers were arrested ahead of the Nordic skiing World Championships in Seefelt, Austria. One of the athletes was caught performing an autologous blood transfusion in his room. The investigation uncovered some 40 blood bags in a garage in Ekfurt, Germany linked to Schmidt.

Schmidt was previously a doctor at the Gerolsteiner and Milram teams and was found not guilty of facilitating doping by Bernard Kohl after the Austrian rider tested positive for EPO in 2008.

Denifl is the only other road cyclist banned in the case, but the UCI also banned mountain biker Christina Kollmann-Forstner for four years.

The case was alarming for anti-doping in cycling not only because of similarities to the 2006 Operacion Puerto case in procedures if not in scale. Operacion Puerto involved five times the number of athletes suspected in Aderlass.

After Operacion Puerto, the UCI instituted the biological passport as a way to combat blood doping.

However, Denifl who signed with the CCC Team for 2019 before dissolving his contract before the season started, showed no 'red flags' in his bio passport according to team manager Jim Ochowicz.

A 2018 Danish study showed that a mere 135ml autologous transfusion could provide an athlete with detectable performance gains while likely falling short of triggering further examinations of the biological passport values.

Researchers are working on a more robust method for detecting autologous blood transfusions.