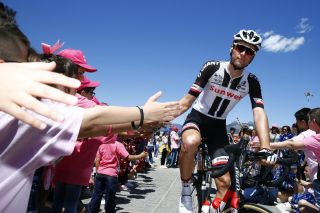 Following reports that the Innsbruck Public Prosecutor's Office has filed charges of fraud against Georg Preidler, alleging he doped in 2017, Team Sunweb, who the Austrian rode for two years ago, have threatened to sue for damages if the accusations are true.

Former Team Sunweb leader Tom Dumoulin has also spoken out, admitting "I might have had a teammate who had not been racing around clean. That is a bitter pill to swallow."

Prosecutor Thomas Willam announced on Wednesday that his office filed the charges that Preidler for "regularly practising blood doping and also taking growth hormones, starting with the Giro d'Italia in the spring of 2017 until his doping confession" and this constituted serious sporting fraud. Preidler has two weeks to lodge an appeal.

Preidler was one of the key domestiques for Tom Dumoulin in his 2017 Giro d'Italia victory with Team Sunweb. If the reports of his doping in 2017 are true, Team Sunweb has vowed to sue for damages even though Preidler left the team in 2018 for Groupama-FDJ.

"This offense would go a hundred percent against agreements that we make with our riders," the team said in a statement to AD.nl "For this we will also contact his last team, Groupama-FDJ, to investigate whether we can work together on this. We also consider them victims in this situation."

The team did not renew Preidler's contract after the 2017 season, but said it was not related to any biological passport values.

"It had to do with doubts as to whether he would still fit well with our team and our vision, whether we could count on him and rely on agreements made together."

In March, Preidler and fellow Austrian Stefan Denifl were provisionally suspended by the UCI following the Operation Aderlass revelations. The two were linked to Mark Schmidt, the doctor at the centre of an investigation into blood doping that turned up 40 bags of blood stored in a garage linked to Schmidt. Preidler initially confessed to having his blood withdrawn in 2018 but denied he ever had it re-infused.

"The news shows once again how important and relevant anti-doping is in our sport," Team Sunweb said.

"That in the end you cannot change the nature of people, but that you can influence behavior through effective investigation mechanisms for the better. We have always argued for even more independent controls, thereby increasing the chance of detection and making people at least inclined to slow down these types of harmful mistakes. It proves how valuable it is that our partner Sunweb is willing to invest since 2018 in more independent doping controls (via the Doping Authorities). This makes more data available and increases the chance of being caught, and therefore the risk for riders. ”

Dumoulin: 'My teammate might not have been racing clean – that’s a bitter pill to swallow’

Tom Dumoulin issued a statement via social media, recalling his time having Preidler as a teammate, saying at one time they were very close and he was angry and upset at the news that Preidler might have resorted to doping.

Dumoulin said he is "beyond proud" of his Giro d'Italia victory but said if Preidler had not been racing clean "That is a bitter pill to swallow".

The Dutchman is currently recovering from the knee injury he suffered during the Giro d'Italia and is not expected to race again in 2019.

In the beginning of this year Georg Preidler, my former teammate from 2013-2017, confessed to using doping since 2018 if I recall correctly. I was angry and upset. Especially because the first few years together in the team I considered him to be one of my closest teammates.

Hearing the news then, apart from being angry and upset, I was also relieved to hear that his doping use started after he left Team Sunweb.

Unfortunately, today I read that Georg Preidler has been accused of using doping also in his 2017 year, including the Giro that I won.

I am shocked to read that. I'm beyond proud of that victory and always will be. But now I know that I might have had a teammate who had not been racing around clean. That is a bitter pill to swallow.

I don't know if it's true, I hope it's not of course. But to be honest, I would not be surprised. He was not the joyful Georg that I knew anymore. He came across as bitter, insecure and self-contained. I think it was very difficult for him to notice that he worked as hard as he could ant it turned out not to be enough to make it to be the rider he wanted to be.

I guess it's doubts that every athlete, including me, deals with from time to time in his or her career. But he turned to doping while others didn't and don't. So am I angry? Yes!

He made a terrible life decision which also affects a lot of people around him, and he can not turn it back. He made a mistake and he will pay for it. But I don't want to be bitter towards anyone and especially not to someone that I considered to be close to me in the past.

I hope he will get his life back on track and that he will be able to find the joyful, nice person within him. I know it's there from the first years that we were teammates and I hope he knows that about himself as well.

In other news, I'll send out an update about my rehab very soon!